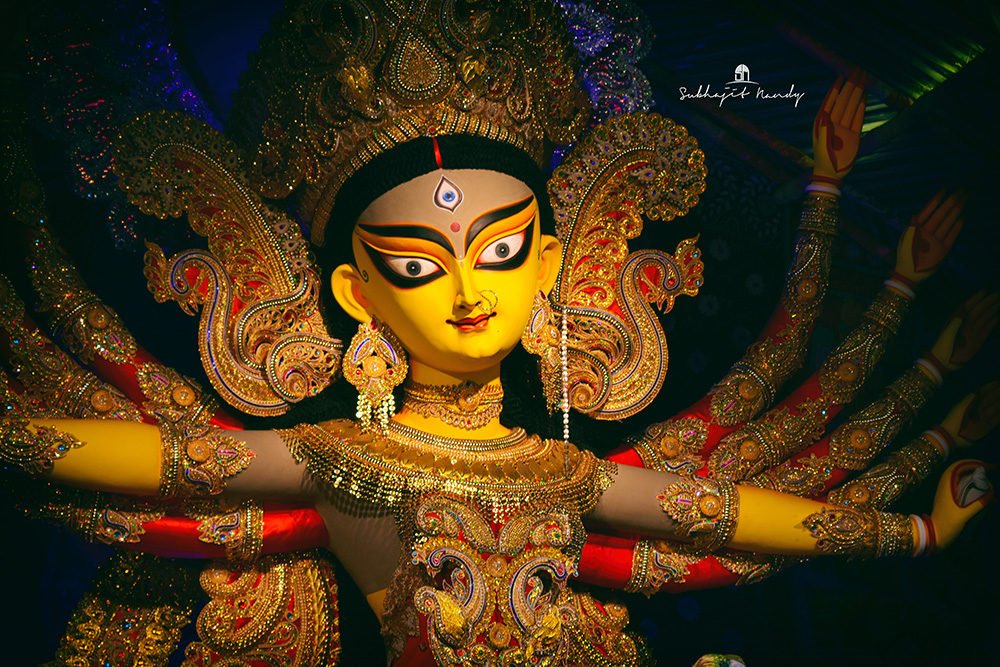 Durga Puja is one of the biggest festivals in India and the biggest in West Bengal (an eastern state of India).

It’s a nine-day Hindu religious festival of worshipping deity Durga on the earth.

The northern part of India celebrates it as Navaratri (a divine occasion of 9 days to worship devi Durga), and a five days immensely joyful celebration is held in West Bengal (especially, the metro city and the capital of Bengal, Kolkata).

In Nepal, the festivity is called Dashain (festival dedicated to deity Durga).

Durga Puja is a divine festival that glorifies a woman’s victory over evil. It’s a celebration of womanhood on earth.

Traditionally, it is held in the month of Ashvin, the seventh month of Hindu calendar (between September to October).

The festivity is also famous as Shardiya Navratri or Shardiya Durgotsav.  (Sharad: the autumn in Hindu calendar and Durga Puja comes during this season, so, the occasion is marked as Shardiya utsav).

Who is deity Durga? Why Durga Puja is celebrated?

In Hindu mythology, Durga, the Adi-Parashakti (the eternal power), is the warrior form of Parvati. She is the bride of Lord Shiva.

Parvati, Adishakti, Sati, or Katyani- she is known by many names and seen in many forms. Durga is the principal form in which she is the slayer of buffalo demon Mahishasura and known as ‘Mahishasura-Mardini’ (who killed Mahishasura).

Her story in Hindu Mythology revolves around confronting evils and demonic forces to restore peace and Dharma (the goodness).

Mythology describes her as a goddess with ten arms carrying weapons and riding a lion. 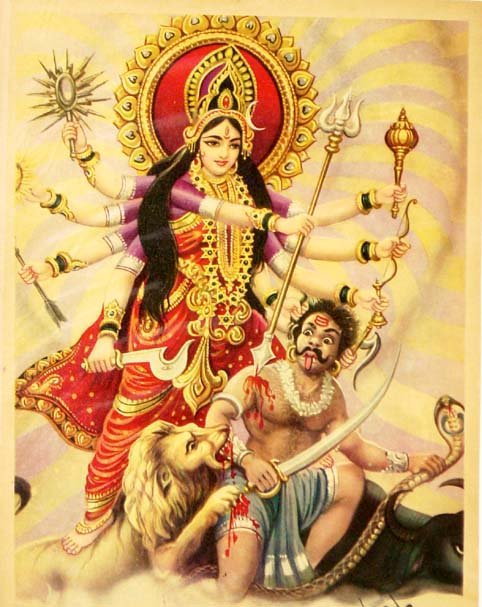 In Hindu mythology, Mahishasura was a tyrant. He was part demon and part buffalo. Meditating for thousands of years, he pleased Lord Brahma and received blessing of not being killed by any man or god in the universe. Armed with this blessing, Mahishasura became an oppressor and started destroying everything on earth. He became so powerful that he chased away gods from heaven.

Scared the gods went to Lord Brahma, Vishnu, and Shiva (the Hindu triumvirate- who are responsible for creation, preservation, and destruction for recreation respectively) and prayed for a solution.

Mahishasura wouldn’t be killed by any male form, so, a female power was needed to destroy the demon Mahishasura.

The united power of Brahma, Vishnu, and Shiva started radiating a blinding light. Out of this dazzling radiation, the female power, the Adishakti Mahamaya, the ten-armed deity Durga, embodied.

She was divine and extremely powerful. One by one all the gods present there armed the deity with an array of weapons.

Lord Vishnu gave her the Sudarshan Chakra, Brahma a pitcher, Varuna (the god of sea) a quiver full of arrows, and Yama (the god of death) a powerful scepter; all only in addition to a thunderbolt from Indra, a menacing axe from Vishwakarma, and a sharp sword from Kaal (time). 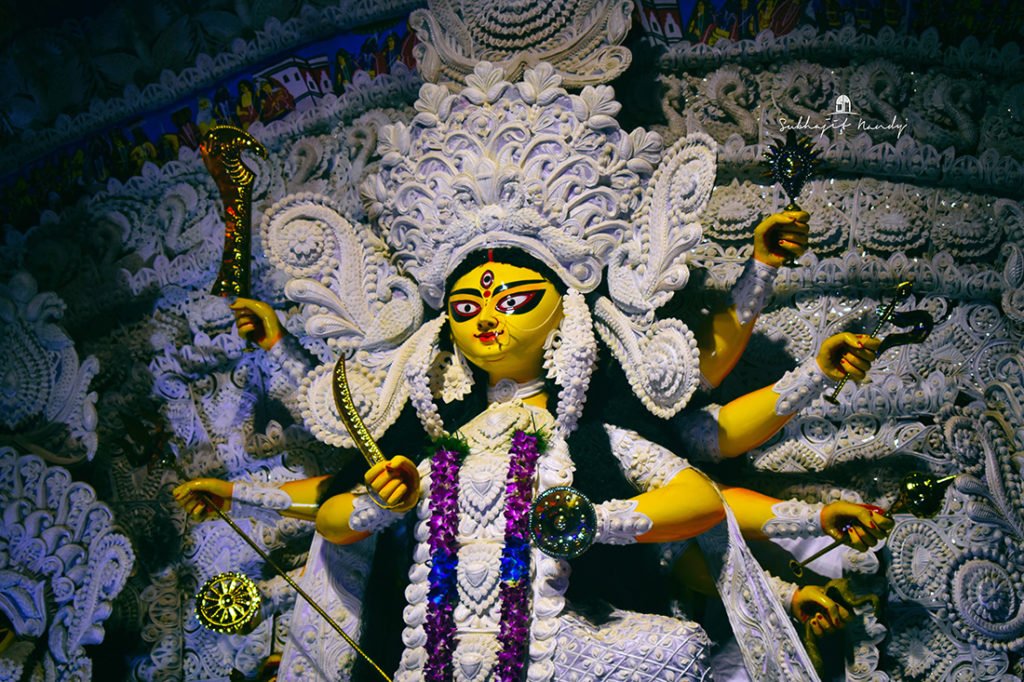 Besides, Airavat (Indra’s white elephant) gave the goddess a bell, Lord Shiva gave her a trident, and the mighty Himalaya presented her a lion to ride on.

Armed with such powerful weapons, deity Durga battled Mahishasura for ten whole days. On the tenth day, after a long dreadful fight the goddess killed Mahishasura. She destroyed the evil power and restored peace.

It was the victory of virtue over wicked.

To honor this win, we celebrate Durga Puja every year. Durga Puja in the Ramayana

The story of worshipping Devi (deity) Durga can also be traced back to the Ramayana, the great Indian epic.

In Ramayana when the demon king Ravana abducted queen Sita and imprisoned her in his palace, Lord Rama went to Lanka (kingdom of Ravana) to rescue his beloved wife. Lord Rama worshipped goddess Durga for nine days long, fasting and praying continuously to receive divine power and have a victory over Ravana. This is known as ‘Akal Bodhan’ in Purana.

Over the course of a thousand years, the ritual of worshipping Devi Durga has become immensely popular and has taken the shape of a great festivity Durga Puja.

And killing of Ravana by Lord Rama is celebrated as Dussehra in many parts of India signifying ‘the triumph of good over evil’. 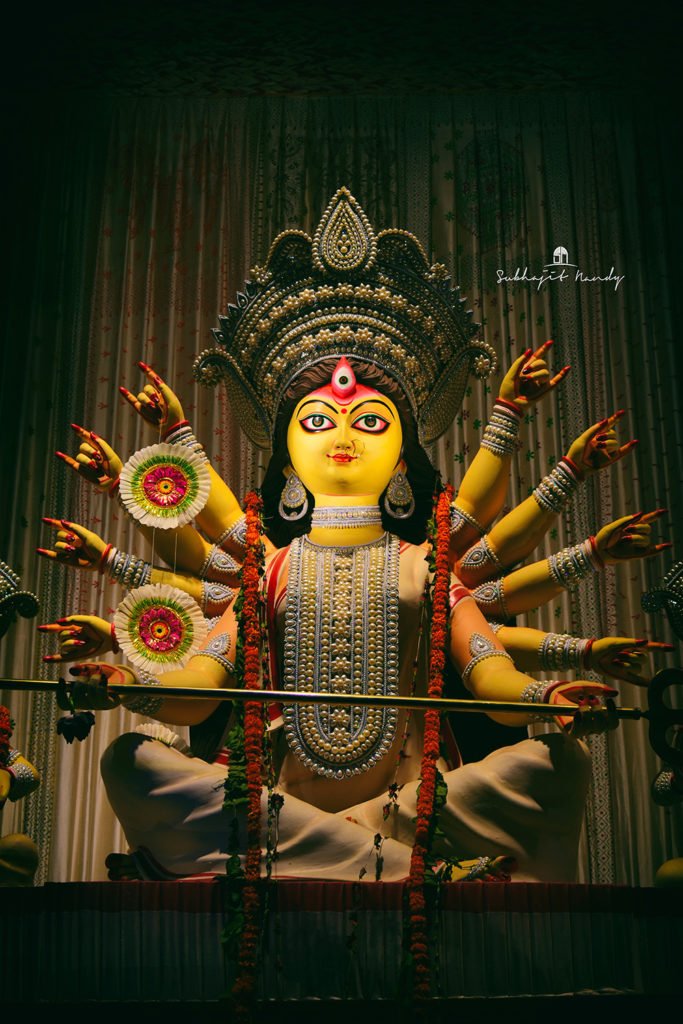 Today, this ancient practice of worshipping deity Durga is a grand fiesta. Crossing the edges of Asian continent, Durga Puja is celebrated in many other countries worldwide.

Artisans make mind-blowing Durga idols in this occasion. These idols are huge and amazingly beautiful, and portray the manifestation of great human creativity. These Durga idols are then taken to big Puja Pandals (the podiums) and worshipped with great devotion.

Durga Puja although is celebrated in many popular cities worldwide, but the metro city Kolkata, showered in lights, becomes the queen of Asia during this dazzling festival of Durga Puja. 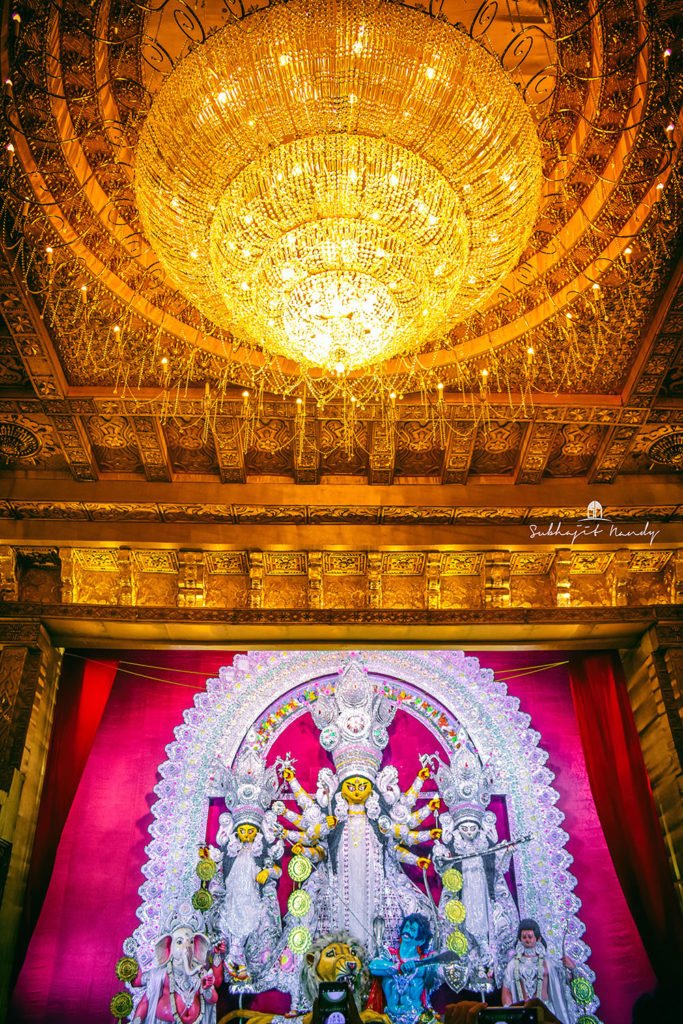 Bagbazar Sarbojanin , one of the oldest Puja Pandals in Kolkata

Every year, Kolkata, the city of Joy, celebrates Durga Puja with unparalleled enthusiasm.

In Kolkata, every corner of the city is lighted, huge pandals with beautifully handcrafted designs are built, and grand idols of goddess Durga are brought to all Puja pandals while playing a traditional drum with loud beats, called Dhak. 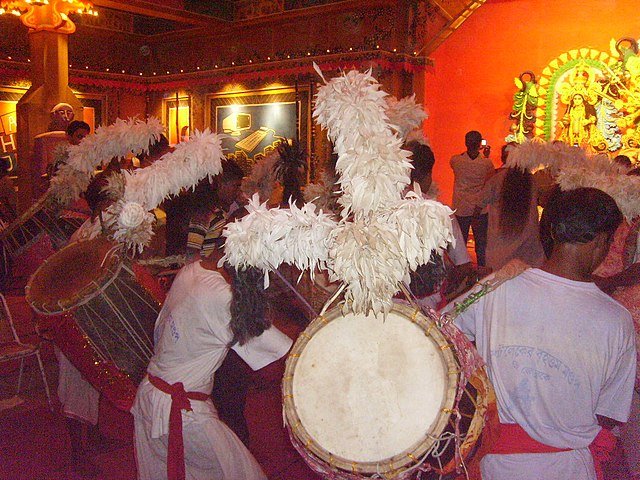 Dhak is being played in durga puja pandal

Here in Kolkata, people have a different emotion for Goddess Durga. Here, Durga is a daughter who after marriage stays in Mount Kailash with her husband Lord Shiva and children Ganesha and Kartikeya. Once every year during the month of ashvin, she along with her children comes back home. People in Kolkata celebrate these days as homecoming of goddess Durga.

Kolkata has immense faith and abundant love for the goddess. The city indulges in a great festive mood during this time.

Happiness is in the air! 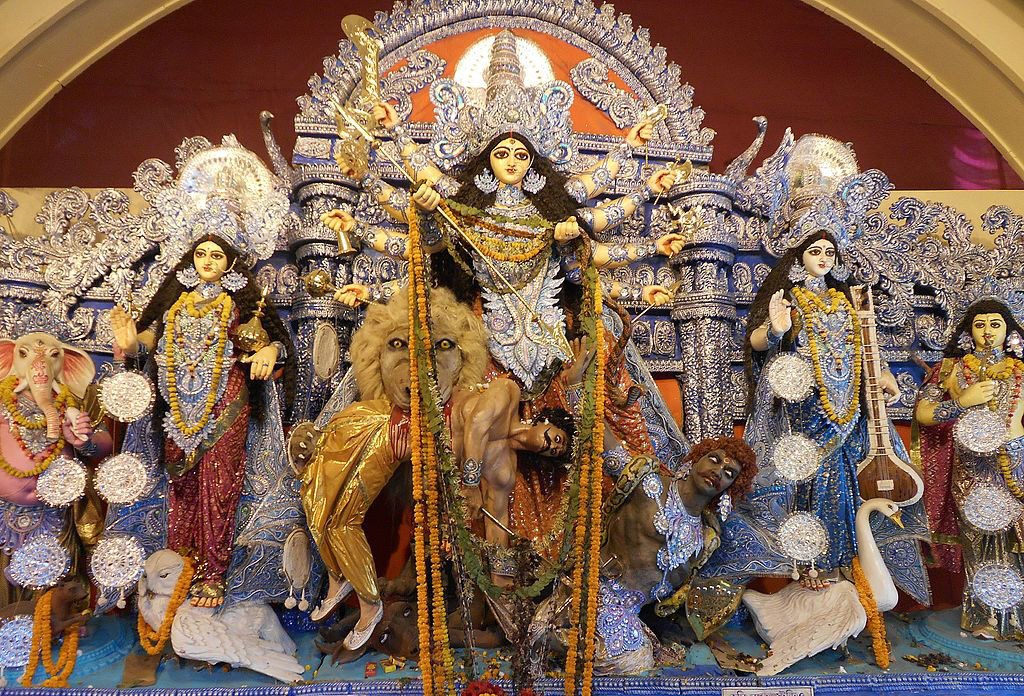 Homecoming of Devi Durga with her children

It is an extremely social occasion. People meet with arms wide open. They wear new clothes to express their happiness on homecoming of Durga.

Food is an important part of the festival. Delicious street foods along with traditional Bengali cuisine are available in great variety. Every evening, people flood the streets. Lakhs of enthusiastic devotees come out in the city of Kolkata hopping through beautiful Puja Pandals for nights in a row.

The lights of these decorative Puja Pandals, arts, crafts, and costly and elegant Durga idols; these are mind-blowing and visiting them will leave you speechless.

So that people can enjoy wholeheartedly, offices, schools, colleges, and other public institutions remain shut during Durga Puja festival in West Bengal. 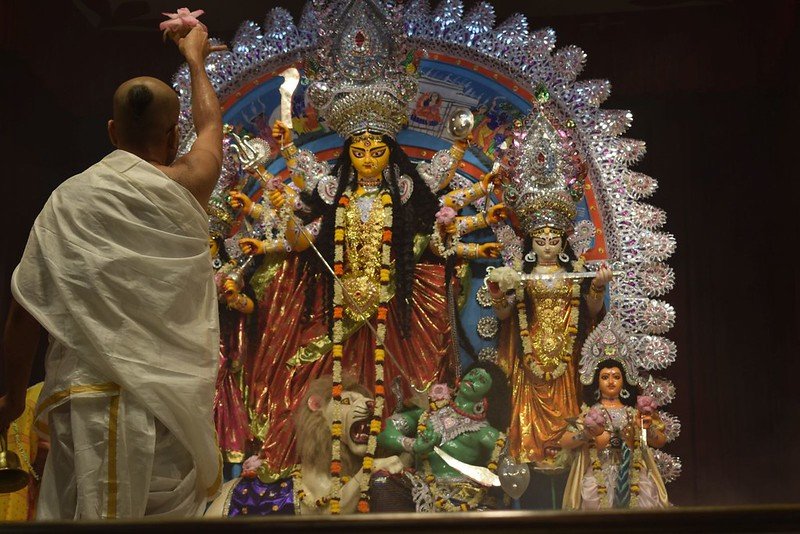 Priest offering lotus to the goddess

There are numerous rites and rituals that are carried out during Durga Puja. Following are some of the well-known traditions practiced every year.

The divine festival of Durga Puja starts at the end of ‘Pitripaksh’ when Hindus offer homage to their deceased ancestors. This has significant meaning in Hindu mythology and Hindu cultural practices. End of Pitripaksh, ‘Devipaksh’ begins when devi Durga comes to earth. The day is popularly known as Mahalaya.

It has significant role in Durga Puja celebration.

Artisans who make Durga idols start working much before the festival. Carving the idols is done beforehand, but the eyes are drawn only on the eve of Mahalaya believing that the deity’s beautiful eyes will invoke life in her and now the idols cannot be left without following Durga Puja rituals such as chanting mantras (hymns), offering bhog (daily food), Arti and so on.

This act of drawing deity’s eyes on Mahalaya is called ‘Chokkhudaan’. After this, all the idols are sent to their destined Puja Pandals. 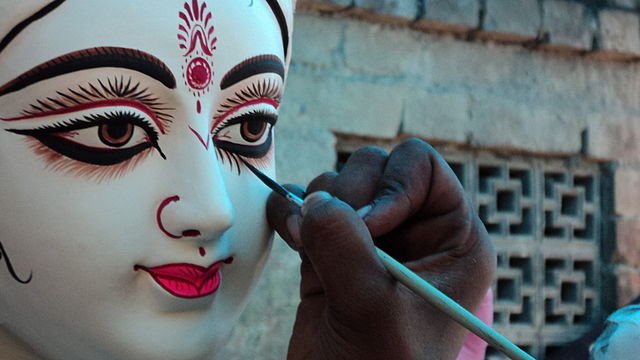 On the sixth day from Mahalaya, the ‘Pranpratisthan’ is performed by chanting slokas. This is to foster life in idols with a belief of invoking Godly power inside them. Prayers are offered to the Goddess every day in many forms by following many traditional practices (with the sound of Shankh, Dhak, and Ulu-dhwani).

Starting from day six, i.e., Shashti, to Shaptami, Ashtami, Navami, and upto Dashmi (the tenth day, when the festivity ends); everyday involves many traditional rites and rituals to please the goddess.

Pushpanjali is a must during Durga Puja. Every morning, especially on Ashtami (the eighth day), devotees gather in Puja Pandals to offer Pushpanjali to deity Durga. Repeating the mantras dictated by the priest, people with hands folded offer flowers and Bel Patra (a holy leaf) to the goddess’s feet and say their prayer.

Every day a Mahabhog is prepared that is the food devotees offer to Goddess Durga. And on every evening, Arti, a wonderful ritual of pleasing the goddess, is performed with the loud sound of Dhak. 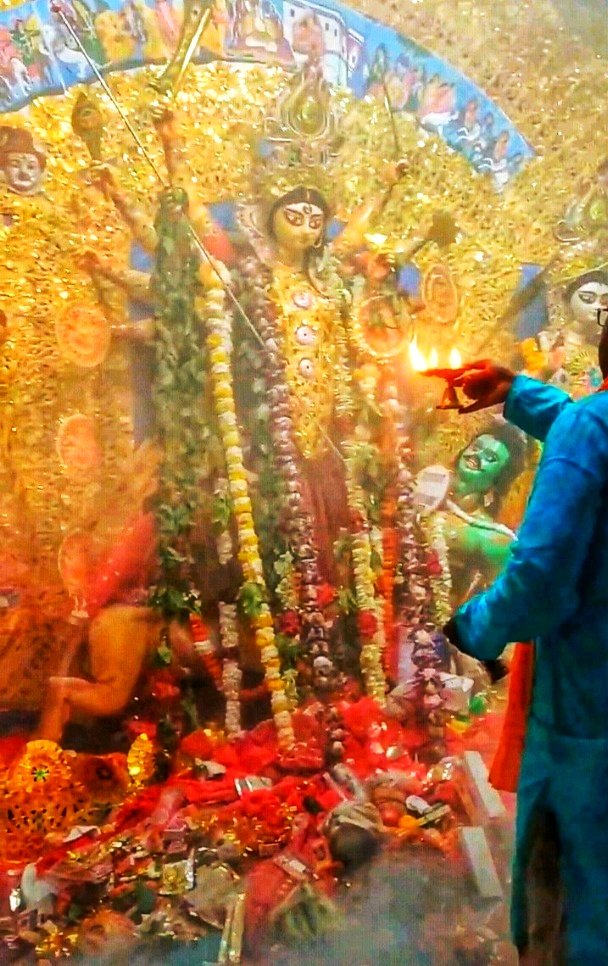 Kumari Puja is a unique custom that takes place on Ashtami, the eighth day of Durga Puja. In Kumari Puja, a young girl (yet to hit puberty) is worshipped with many offerings and slokas. It symbolizes the manifestation of divine female energy and involves purity and respect for women in society. 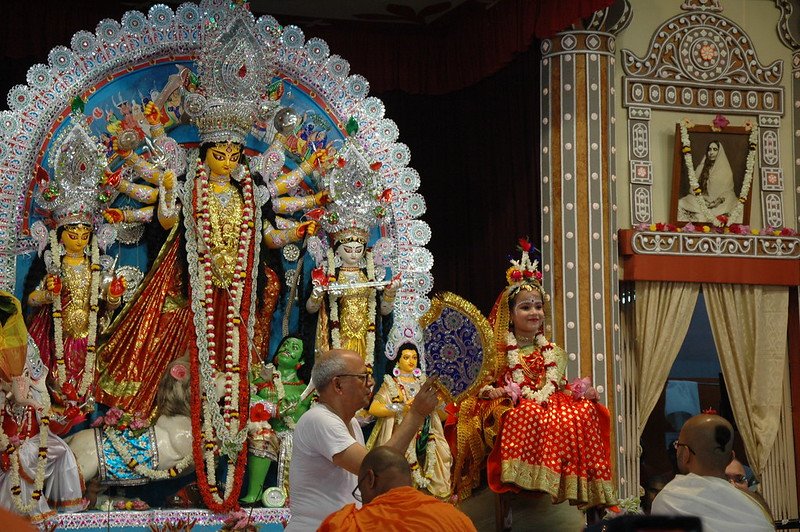 This custom of Kumari Puja is much regarded. Along with Kolkata, this practice of doing Kumari Puja is performed in many other parts of India. In the northern part of India, it is called Kanya Pujan.

On the eighth and ninth day of Navaratri, people in North India invite nine young girls (or Kanya) to their homes and worship them.

Sandhi Puja is one of the most important rituals of Durga Puja celebration.

At the moment when Ashtami ends and Navami (the ninth day) begins, Sandhi Puja is performed with 108 blooming lotuses and 108 lit earthen lamps. 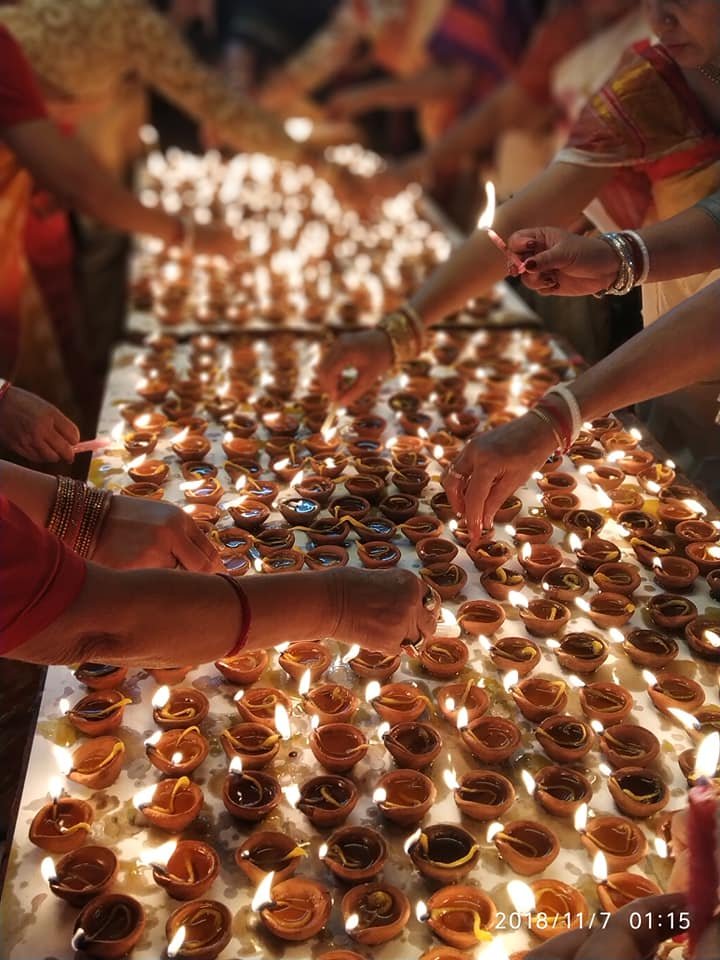 The last 24 minutes of Ashtami and the first 24 minutes of Navami: this auspicious period of 48 minutes is called Sandhikhan. It is believed that the deity Durga slayed the demons Chanda and Munda (the allies of Mahishasura) during this Sandhikhan. Till Navami, Devi Durga stays among her devotees. This is a period of extreme joy and remarkable celebration among people.

On Dashami, the tenth day, people with dying hearts say goodbye to their adored Devi Durga while seeking a promise that she will come again the next year.

Married women offer sweets and Sindur (Vermilion), a red colored powder, to Devi as a symbol of their love (applying Sindur is symbolic of being married among Hindu women). It is a joyful celebration among women called ‘Shidur Khela’ where they smear Sindur on each other and wish Subho Bijoya (the day of victory). 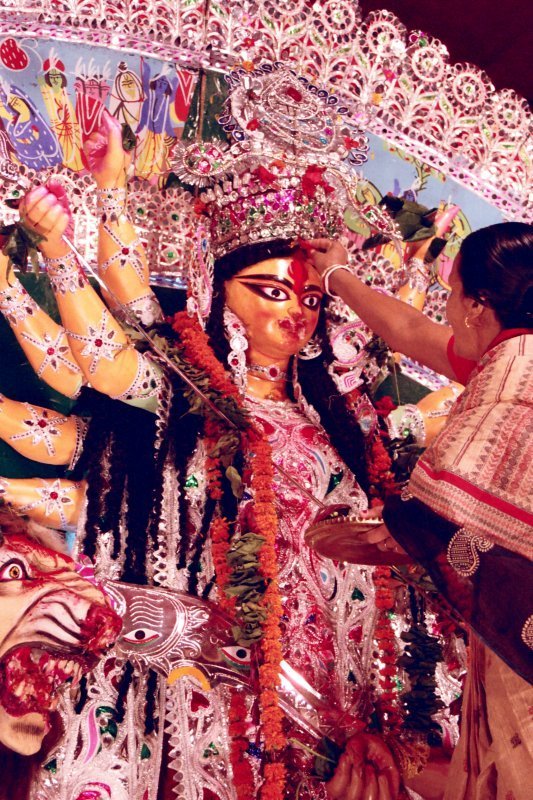 Completing all the rites and rituals, Durga idols are taken to nearby rivers for immersion. This process is called Visarjan. Now, devi will be returning to her husband Lord Shiva.

A tearful moment for devotees. 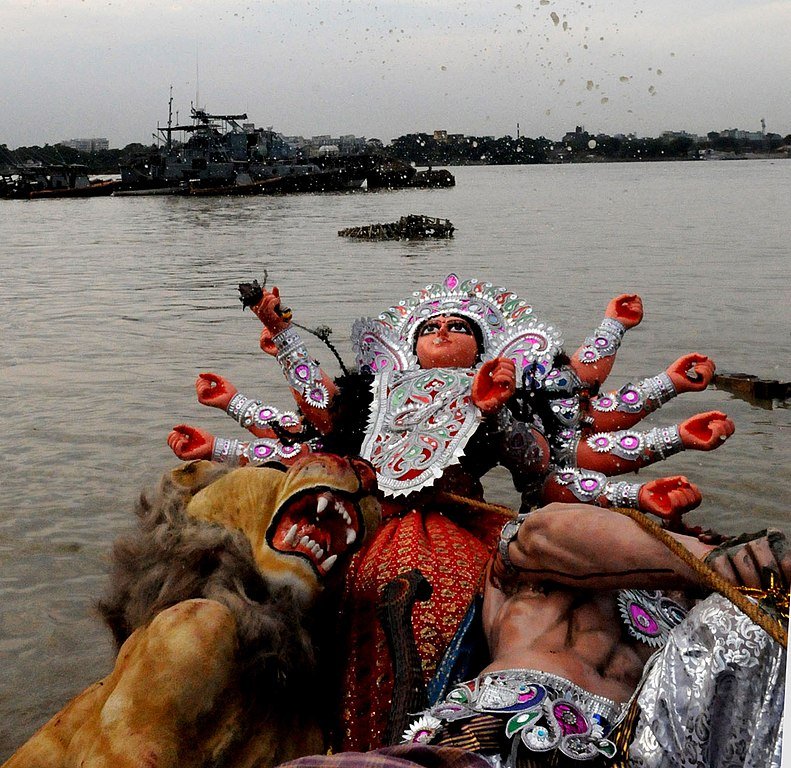 Durga idol being immersed in the river Ganges in Kolkata.

On the same day, the northern part of India celebrates Dussehra after nine days of Durga Puja to mark the killing of demon king Ravana by Lord Rama. 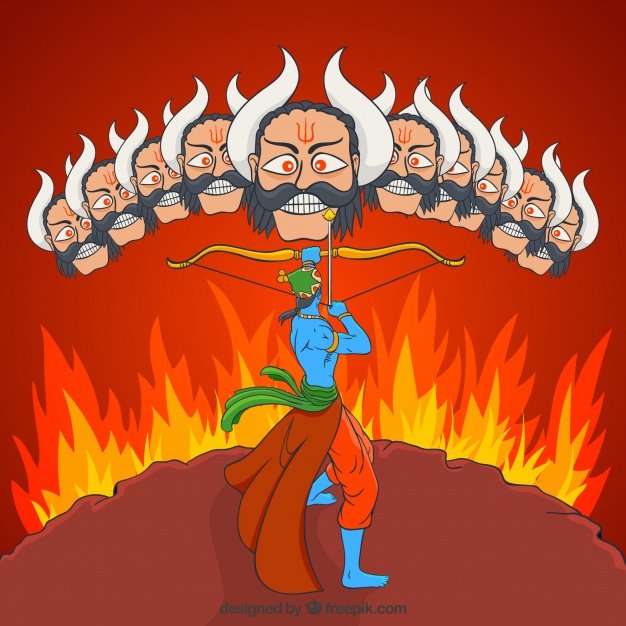 This way, India celebrates Bijoya Dashami, the triumph of good over evil.

With increasing popularity, Durga Puja has reached more than one fifty places across thirty-six countries including Japan, Singapore, Malaysia, China, Australia, and so on.

In USA, Europe, and Africa, Durga Puja was started half a century ago. Durga Puja in overseas countries organized by expatriate Indians is highly valued and carries great emotions. It is a moment when the NRIs staying thousands of miles away from home come together to celebrate their extremely loved occasion, Durga Puja.

Previous Post
Bali, a lush tropical paradise, in the heart of Indonesia