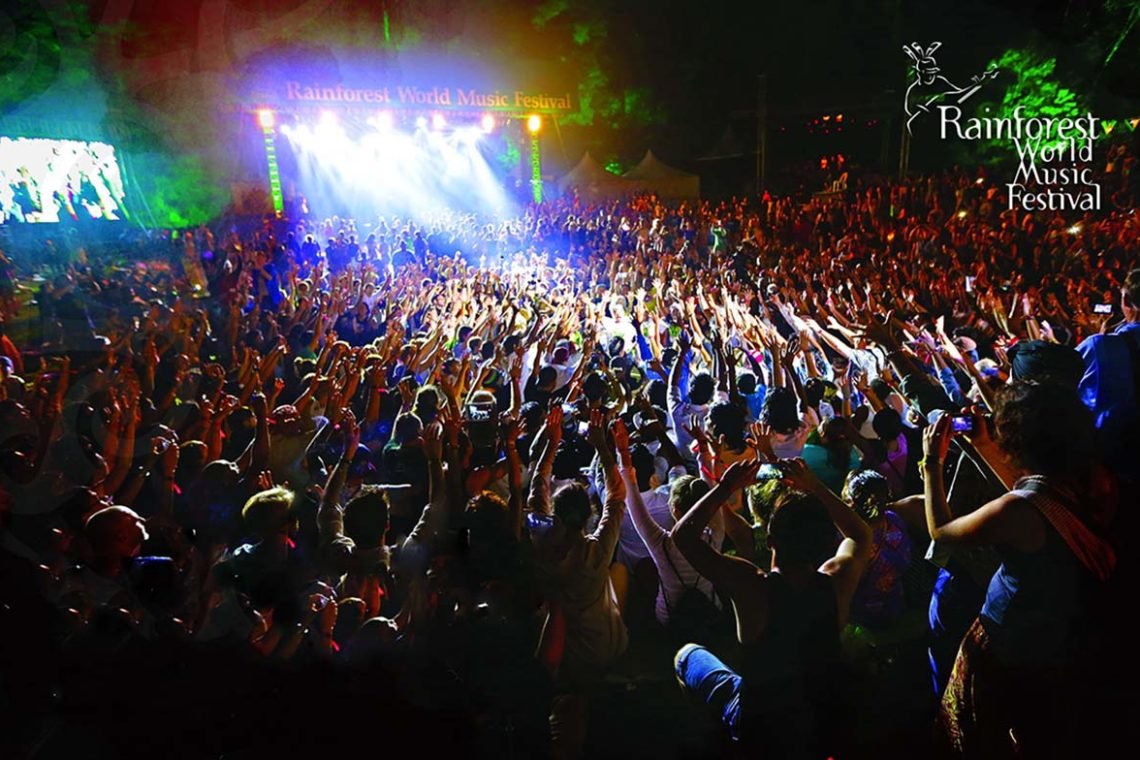 Every year, Malaysia celebrates a unique and vibrant three-day music festival to cherish the diversity of world music. Rainforest World Music Festival (RWMF) provides musicians across the world a stage to share and showcase their talent on a global platform.

The show brings legendary musicians from all seven continents and native talent from the mystical island of Borneo, the third-largest island in the world and the largest in Asia.

The event takes place in the midst of lush greenery of Sarawak Cultural Village located 35 km north of Kuching, Malaysia. It’s a beautiful place nestled at the foothills of Mount Santubong, not very far from the South China Sea and Malaysia’s beautiful seashores.

The place is the perfect mix of pristine rainforest and dreamy sea beaches. Reaching there takes you 50 minutes from the Kuching International Airport.

In the evening, the main stage comes alive with dynamic performances by musical bands reaching there from all parts of the world. The evening concert is a ‘must-see’ affair that attracts thousands of visitors every year in Kuching.

Roaming around becomes fun when you see vendors offering all types of hand-made crafts, art, jewelry, and exhibitions by locals hosted everywhere.

People gather here to celebrate nature, culture, and music together in one place.

The festival is included in the list of 25 best international festivals by Songlines, a British magazine which covers the music of all types from around the globe.

Along with the radiant musical performances and live events on stage, Rainforest World Music Festival greets you with a greener note.

Sarawak Tourism Board aims at making the festival a sustainable event by taking the green initiative into various aspects of this joyful international event.

Starting from day one, the festival encourages eco-friendly products.

The management closely cooperates with food and drink vendors to select biodegradable tableware and say no to disposable plates or cutlery made from Styrofoam.

Across the village, people will find bins with creative signage and posters to segregate their waste accordingly between recyclable and food waste.

The organizers keep the festival’s organic waste and food scraps out of landfill by closing the loop. Biji-biji Initiative, a social and environmental enterprise in Kuching, along with Worming Up, a waste management consultancy, collect and channelize leftover food into compost bins. Information: RWMF

Rainforest World Music Festival, along with igniting the passion for music, raises public awareness through their spectacular green initiative every year.

Started in 1997 by a small group of music lovers and local musicians of Kuching and with an audience of 300 soon gained popularity and became one of the most awaited musical fiestas in the world that Sarawak joyfully hosts every year.

The festival has multiple awards in its bucket. It is the winner of the Heritage and Culture PATA (Pacific Asia Travel Association) Gold Award 2006, HSMAI (Hospitality Sales and Marketing Association International) Silver Adrian Award 2012, Top 25 Best International Festivals by Songlines for six consecutive years from 2010 to 2015, Asia-Pacific Excellence Award 2016 in the ‘Event & Experiential Marketing’ category, and many more. 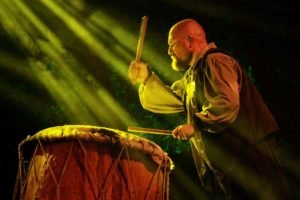 The iconic Rainforest World Music festival recently celebrated its 22nd consecutive year in July 2019 with over 20000 festival-goers and tourists.

This time, there were newcomers from many countries.

Ainu people from Japan; people from Nagaland, Northern India; people from Canary Island, Bhutan, the Islands of Mauritius and Jamaica, Estonia in Northern Europe, and from the life’s rich tapestry that is West Kalimantan, a beautiful province in Indonesia dwelled together in the heart of Borneo Jungle.

There were more than 39 musical bands with 9 newcomers, 27 lifestyle and wellness sessions, and musicians from 27 different nationalities staged together in the Sarawak Cultural Village.

The village was divided into multiple sections including Ingenious stage, Theatre stage, Tree stage, and Rainforest Music Houses to give a platform to the performers and artists to interact with all music lovers and guests.

This year’s gathering was the biggest and the best yet, with new styles and genres. There were workshops with Malay Dance, Stringed instruments, Zampogna (an Italian bagpipe) and many more.

The world-class performances by world-famous musical bands like Blackbeard’s Tea Party from England, Ryuz from Japan, Karinthalakoottam from India, and Kalakan from Spain left people stomping and dancing to melodies of all kind.

World music with a country fair atmosphere amid rich greenery brings people of all kinds together to speak one language: ‘Music’.

This event is the perfect example of ‘music is life, life is music.’