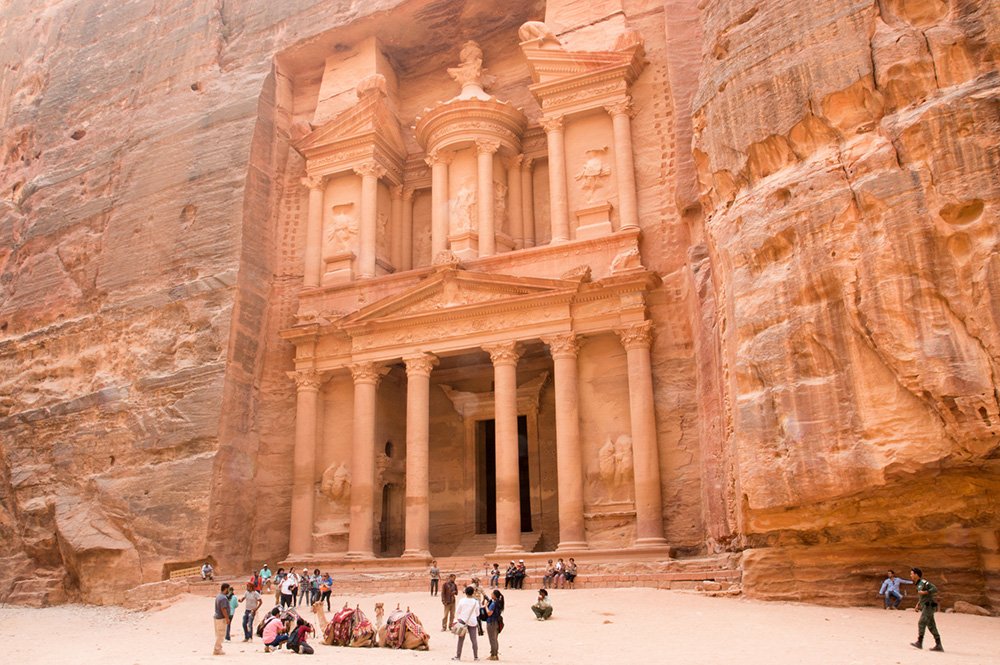 Petra. Jordan’s stunning city of stone. A must see in Asia!

Petra, the lost city of stone, was unknown to us for thousands of years. It was until a European traveler invaded the city secretly, that this buried gem of Jordan was revealed to the world.

Carved into rocks and enclosed by mountains riddled with passages and gorges, Petra, since prehistoric times, was the capital city of Nabataeans (the ancient Arabian people who settled here and flourished reputedly since 312 BCE).

Nabataeans’ kingdom grew from the cliffs and peaks of Petra and their abundant wealth fattened from lucrative trades.

Set in a dominating red sandstone landscape, elaborate with hand-hewn caves, palaces, temples, and tombs in the high desert of Jordan, Petra is one of the world’s richest and largest archaeological sites.

Also known as the ‘Rose City’!

Hidden by time and layers of sand, Petra reveals the story of a lost civilization. 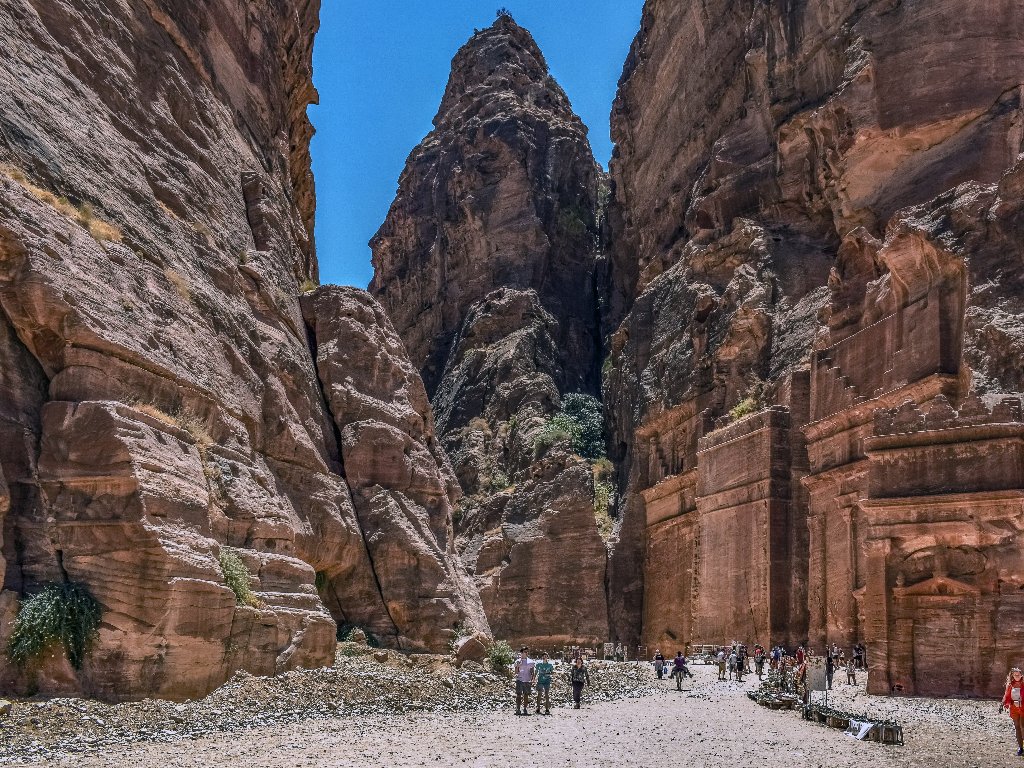 What would you see when you visit Petra? 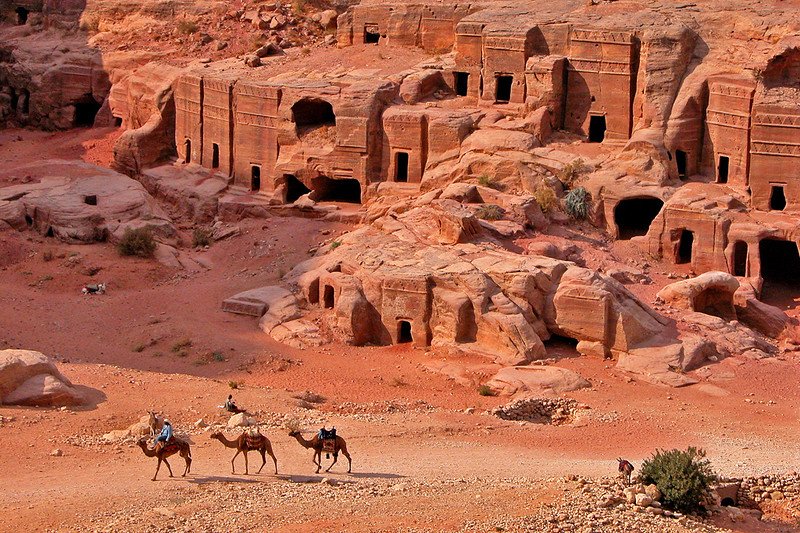 You’ll see varying blends of Nabataeans and Greco-Roman architectural styles in the city’s tombs and other monuments that were once looted by thieves in search of treasures.

The baffling tombs and temples, religious high places, remnant channels, tunnels and diversion dams integrated with a vast network of cisterns and reservoirs which once would control and conserve seasonal rains, and the ample other archaeological remains will give you a glimpse of a highly equipped human settlement of that time.

Archaeologists say that only 15 percent of the city has been uncovered and rest 85 percent remains underground. 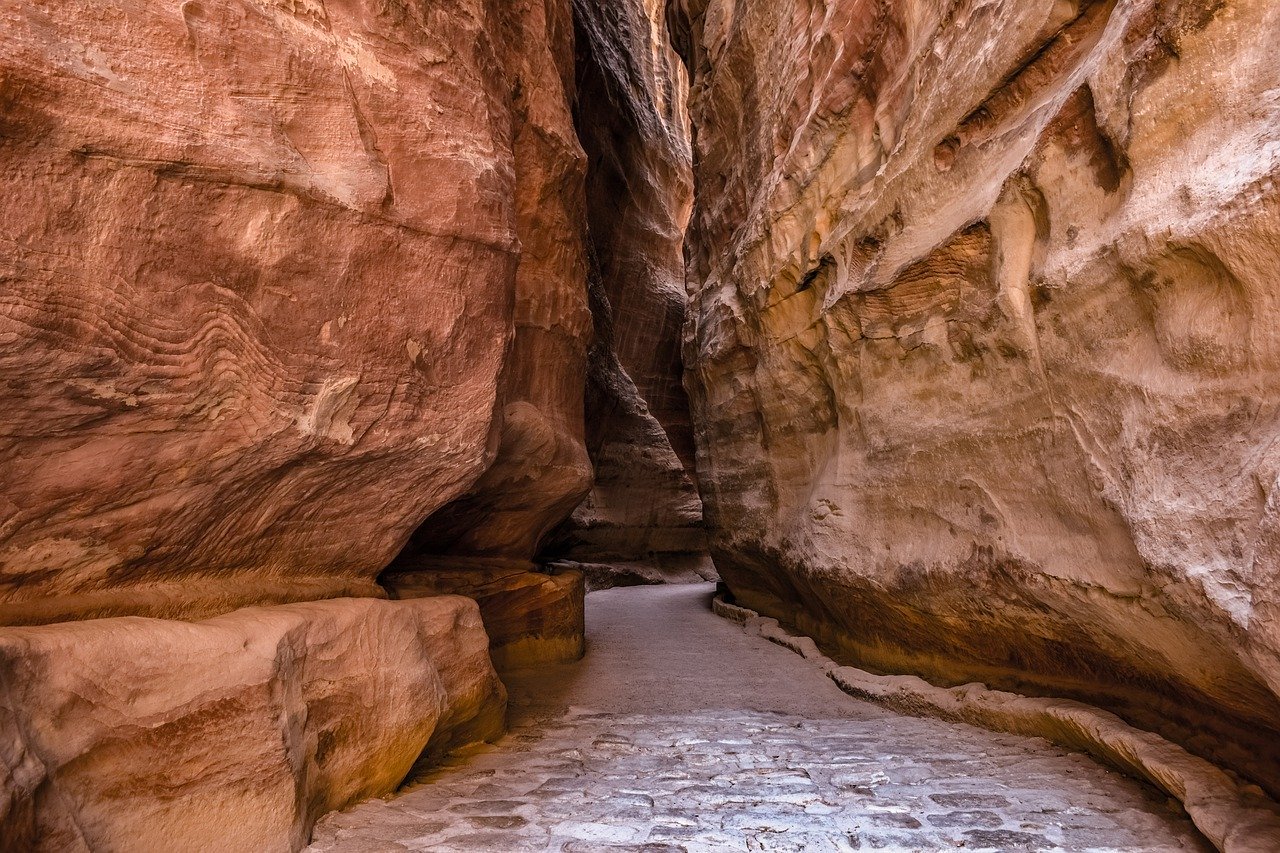 You enter Petra through an over 1 km long, narrow, and high walled Siq (a crack in the big golden rock) which is flanked on either side by soaring high cliffs.

Whether you’re going by foot, cart, or camel, the journey through this deep, dark passage is so much adventure! A journey of a lifetime!

Surrounded by dazzling rocks, it’s a unique geological landscape that welcomes you to the world of Petra.

The Nabataeans carved water channels, dams, and niches into the walls of this Siq. If you’re lucky to visit them on a rainy day, you might see them functioning till date. 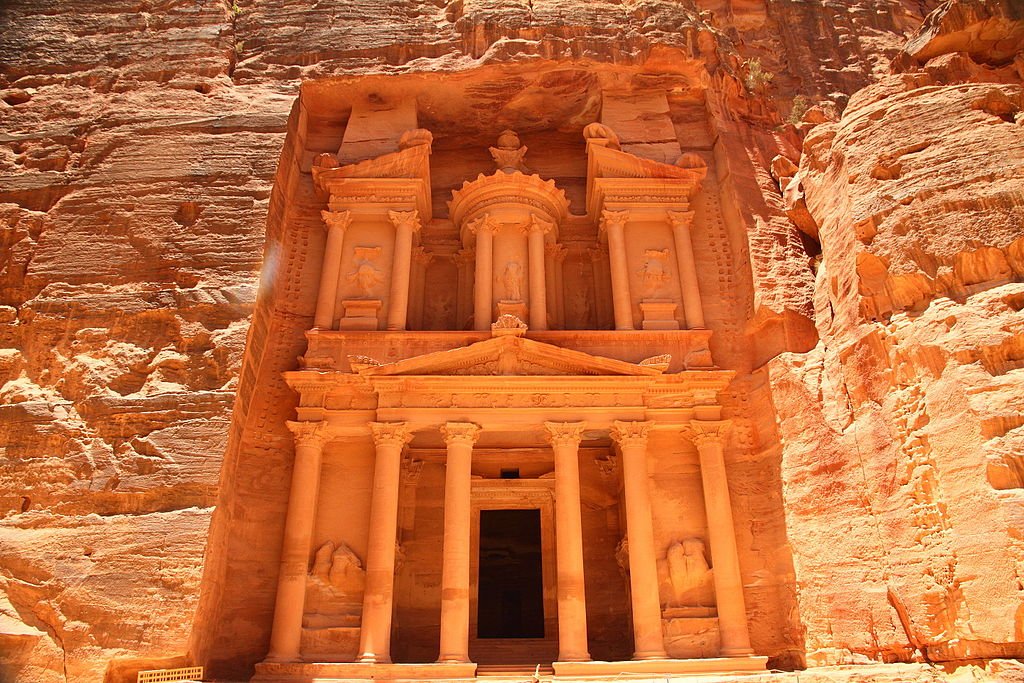 As the Siq becomes narrower and darker in the last few meters, you start wondering if it has an end. At once, you catch a bright glimpse of Petra’s most impressive architecture ‘the Treasury’ at the end of the cleft.

Here, the travelers fall in love with the beauty of Petra.

Carved out of iron-laden sandstone, it’s a 43 meter high beautiful tomb which was built for the Nabataean King Aretas III (c 100 BCE-CE 200).

Due to a local belief, the treasury is popular as Al Khazneh. Khazneh, ‘the treasure’, the locals say, once had an Egyptian pharaoh hide his treasure in the top urn of this tomb.

Admiring the charming beauty of the facade of the tomb carved into pink rock with Hellenistic architecture, intricately carved pillars, alcoves, and plinths, during daylight is an overwhelming experience.

But if you visit at night, Petra makes your journey magical when you see hundreds of candles illuminated to usher your path through the Siq and to the magnificent treasury.

However, you aren’t allowed to enter the Treasury due to fear of wreckage. 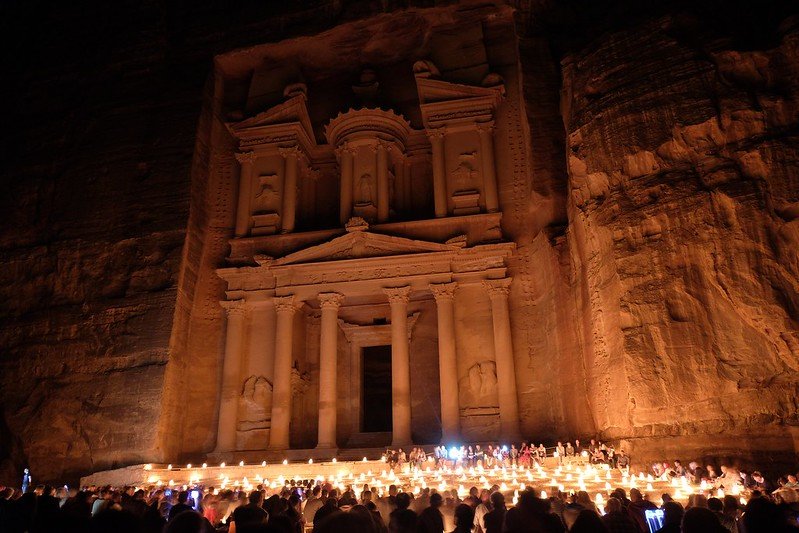 Best views of Petra from the High Places of Sacrifice 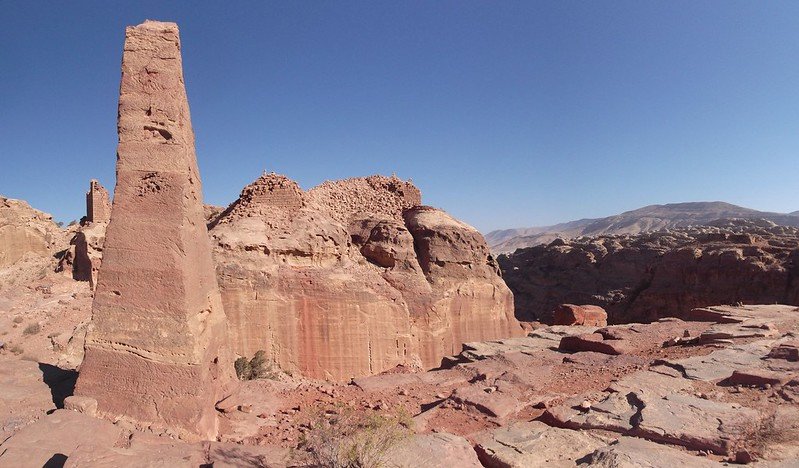 From the treasury, the street starts expanding to the outer siq riddled by more than 40 tombs, altogether known as the street of facades.

A little ahead, before you reach Petra’s famous Roman style theatre, you find a set of stairways on the left going up to the High Places of Sacrifice. It’s a steep 45 minutes climb.

But your every step is worth when you watch a spectacular view of Petra down below. It’s amazing to stand high on the holy ground of the Nabataeans where they used to hold religious ceremonies to honor their god.

The theater is massive and carved out of solid rocks with three rows of seats separated by passageways. This can accommodate approx. 6000 spectators.

The theater once was badly damaged by an earthquake. 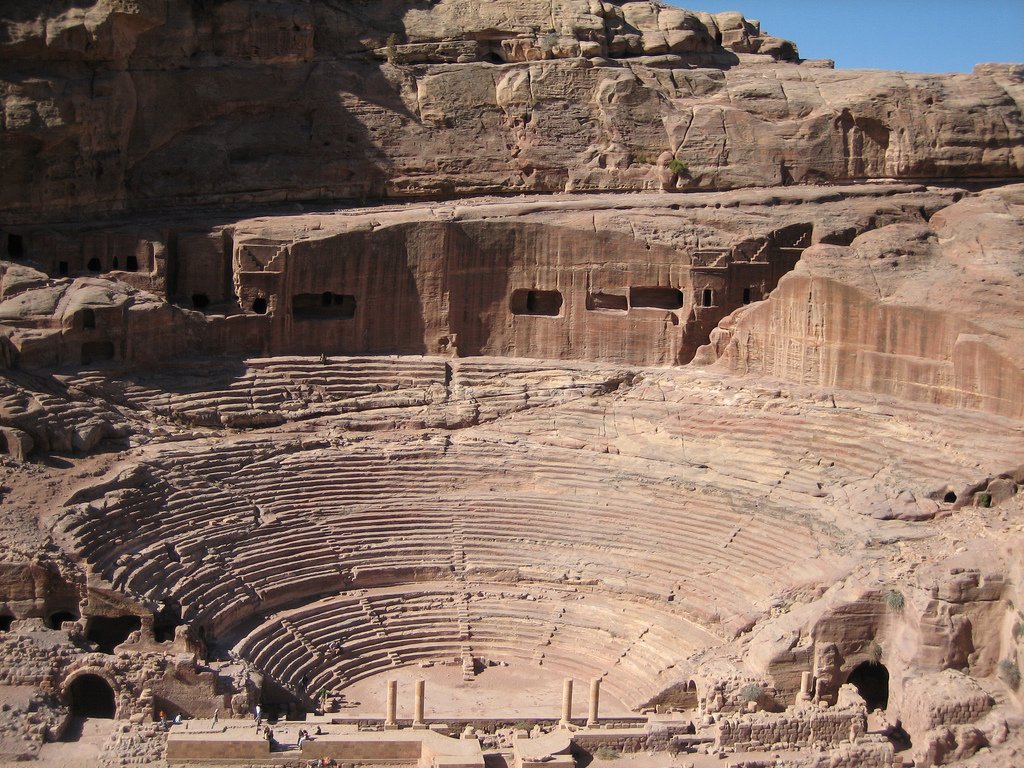 You can also visit two excellent museums out there. The Petra archaeological museum and the Petra Nabataean Museum that give you insight about Petra’s rich and opulent past, and also display findings from excavation.

Take a tour to the Urn Tomb 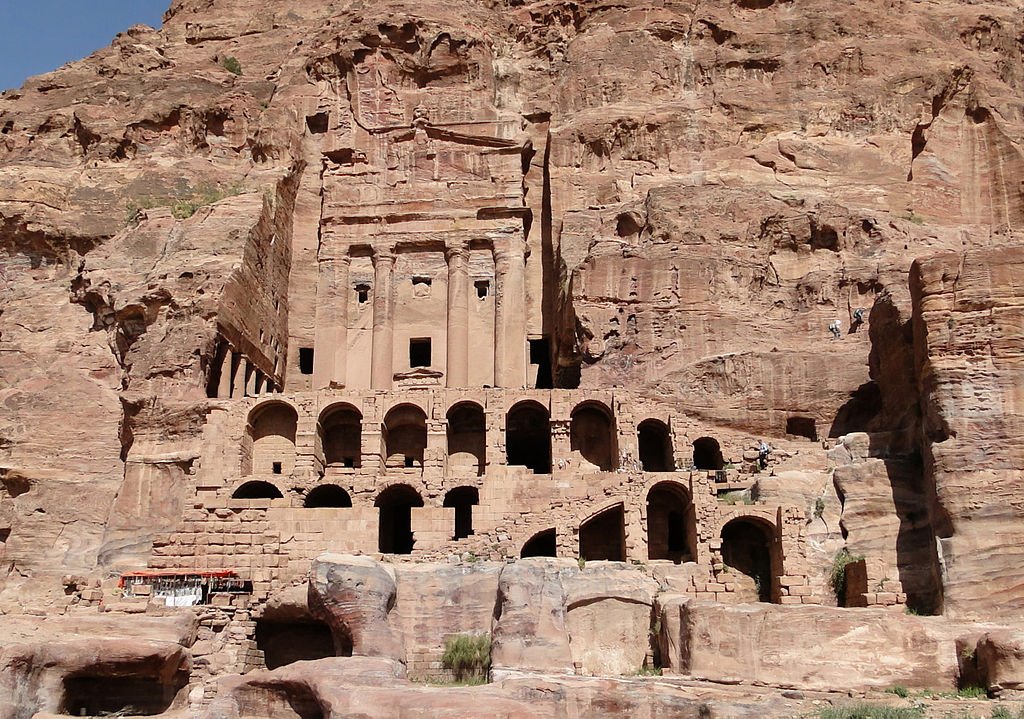 Petra has many royal tombs, but the most distinctive of all is the Urn tomb. You can easily recognize it from far by seeing a gigantic urn on the top of its pediment.

It’s huge and was built in approx. CE 70 for king Malichos II as his burial.

However, this royal burial was later reconstructed as a church to worship (according to a Greek inscription that’s found inside it)

Spreading over a hundred square miles, the entire city of ruins, painted on a natural stone backdrop is a perfect piece of art. Petra attracts millions visitors every year.

It’s a UNESCO World Heritage Site and one amongst New 7 Wonders of the World!

Also Read: Angkor Wat, one of the most impressive archaeological sites from Southeast Asia

Want to know more about Petra?

The Nabataeans started living here long before the arrival of the Romans in Petra.

The city was then thriving as a lucrative trading center and was the prosperous capital of the Nabataeans Empire.

Situated between the Red Sea and the Dead Sea, this rock-cut city of Petra was the major caravan center, linking camel caravans between the Mediterranean and the Arabian Sea, and from Egypt to Syria and beyond to Greece.

And through the crossroads between Arabia, Egypt, and Syria-Phoenicia, the Nabataeans were then trading the incense of Arabia, the silk of China, and the spices of India. 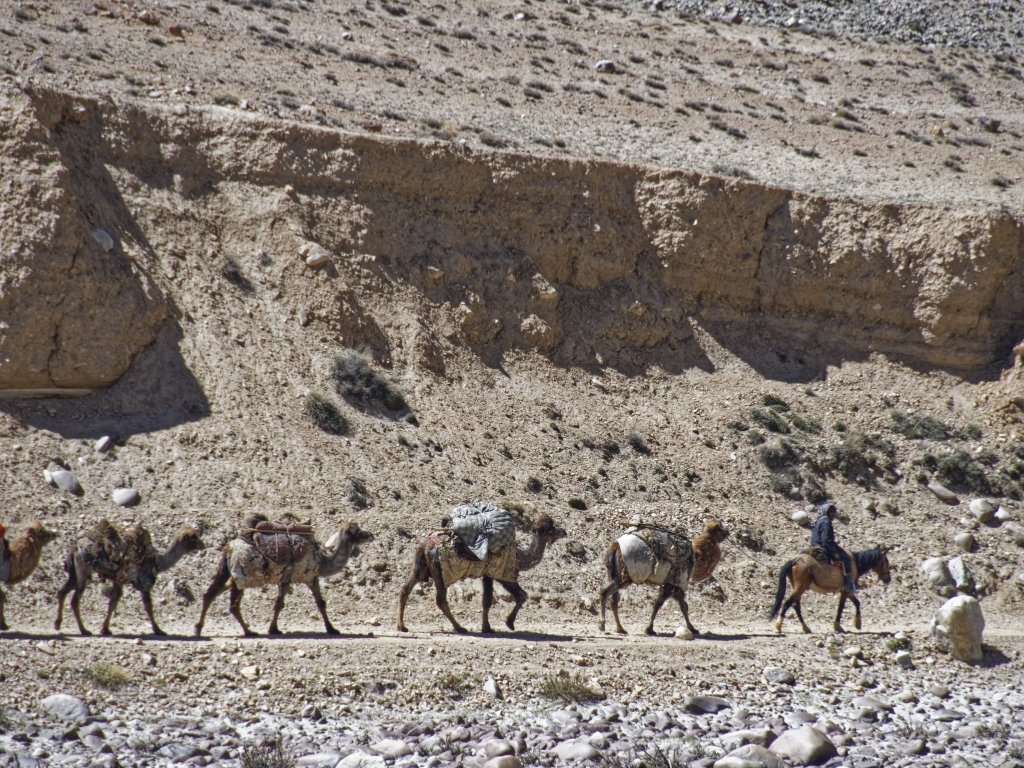 The Nabataeans had a superb ability to vanish into the cleft rocks that saved Petra from being conquered for centuries. And their ingenious water system supported an extensive human settlement in an essentially arid area.
The Romans came to Petra in 63 BCE and conquered the Nabataeans.
Before that, the Nabataeans led a vast zone of the Middle East from present-day Israel and Jordan into the northern Arabian Peninsula. The remains of their ingenious engineering in the form of innovative water and irrigation system are still found throughout this area.
When the Romans took possession of Petra, its value in trade began to wane. The city witnessed repeated earthquakes and it finally ended when due to the rise in sea trade routes, Petra became commercially irrelevant. And without that commercial lifeblood, the Nabataeans had no reason to struggle against the desert.
However, Petra still shines with Nabataeans’ mind-blowing architectural achievements and royal glory that remains intact even after thousands of years.

Previous Post
Kathakali. An amazing Asian art leaves you mum with its performance!