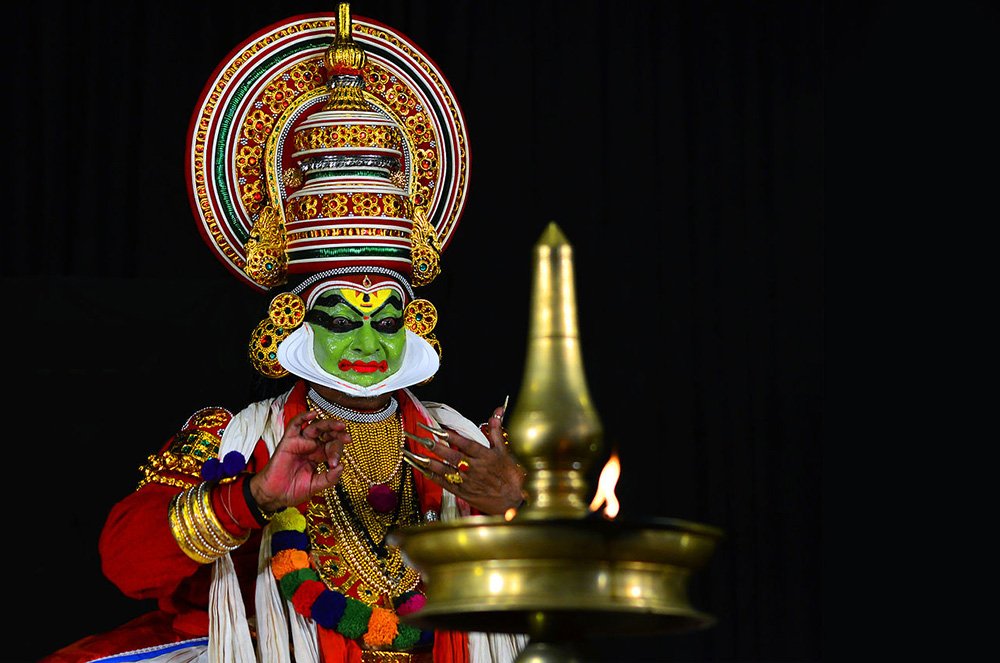 Kathakali. An amazing Asian art leaves you mum with its performance!

Kathakali (literally meaning ‘Story-play’) is a legendary dance-drama which originated from the southern Indian state of Kerala during the late 16th Century.

Kathakali is so prominent with its elaborately colorful costumes and distinctive makeup of the participating characters; and the way they communicate stories to the audience (without uttering a single word) is excellent and vigorous!

With great footwork, intricate facial gestures, and the perfect movements of hands and fingers; Kathakali dancers convey stories mostly from the great Indian epic Ramayana, Mahabharata, and ancient scriptures of the Purana.

Traditionally, Kathakali was performed exclusively by men. Dressed in women’s attire, men used to portray the female characters from the story. But, in recent times, women are also becoming Kathakali dancers. Also, along with Indian mythological stories, the stories from the western world like plays written by Shakespeare are being added to Kathakali. 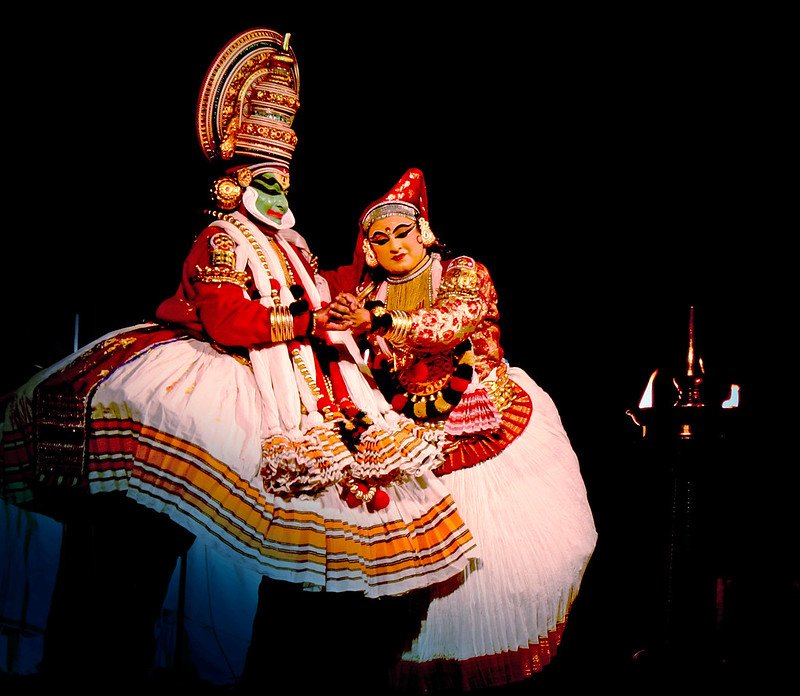 How did Kathakali evolve?

Kathakali, the way you see it today, is a contemporary form that has evolved over the centuries from other social and religious arts like Ashtapadiyattam, Koodiyattam, Krishnanattam, and Ramanattam that existed in the southern region of ancient India.

The energetic footwork that you see in Kathakali has been derived from Kalaripayattu (the oldest form of Martial Art from Kerala).

In Koodiyattam (an old Malayalam performing art), actors do not speak or sing but focus on dance sequences and especially on their intricate abhinaya (acting) exactly as you see in Kathakali today.

In Krishnanattam, a dramatization of Lord Krishna’s life-story would be presented to induce emotional attachment and bring a dedication to Lord Krishna. Likewise, in Ramanattam, Lord Rama’s life-story used to be portrayed.

Earlier these sacred dance-dramas were mainly performed in palaces, temples, and religious festivals. While wearing colorful costumes and headdresses, and with intricately painted faces, actors used to portray stories, centuries ago. The purpose was then more religious.

Kathakali also evolved as a ritual dance only, as an offering to temples during a religious festival. But it was a better version of all the above-discussed dance-dramas and reached a broader audience. While the other forms remained relatively unknown, Kathakali became much popular and achieved the status of a national treasure.

Many factors have contributed to its popularity. Like, Kathakali does not only evoke religious sentiment in people or is not merely a way of entertainment, but it nicely portrays the reflection of human nature by showing moral stories that inspire higher thoughts in you and bring you a deeper understanding of life and truth.

Also, Kathakali is not restricted to temples and religious festivals only, but you can often enjoy it in theatres and other special events. Kathakali has also attracted western audiences by including western stories in their plays. 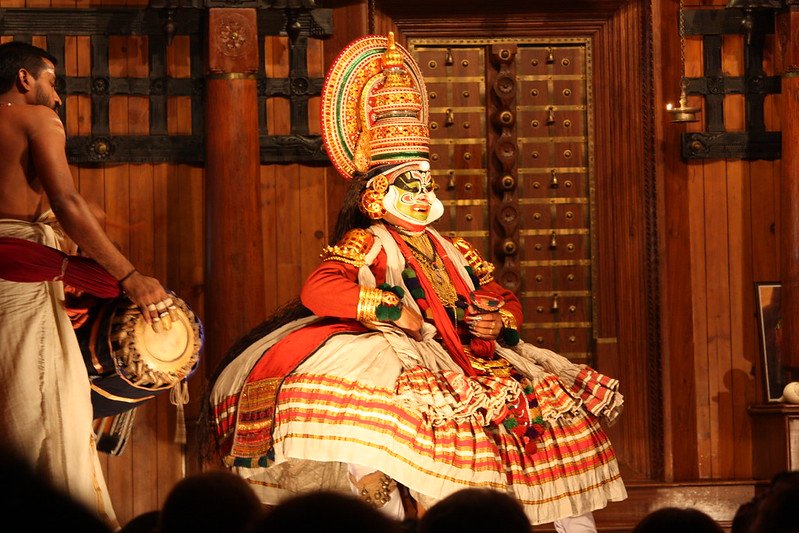 Kathakali is a combination of 5 fine elements of art

Nritham (dance): while following the rhythm, it’s the movements of hands, legs, and body,

Sangeetham (music): the song or vocal support to convey stories

Songs of Kathakali are framed in rich poetic diction. They’re among the gems of Malayalam literature. The language that’s used to sing those songs is Manipravalam (a perfect blend of Sanskrit and the regional language Malayalam).

Before knowing how Kathakali is performed, it’s interesting to know how they transform into a character

For Kathakali, makeup is the most crucial part of character building. Painting a perfect face requires hours of labor and expertise.

There are many character types in Kathakali.

A unique combination of costume, ornaments, and a facial makeup together constitute a unique character type and you can easily identify them!

You can identify them by the predominant color of makeup and the way it is applied. 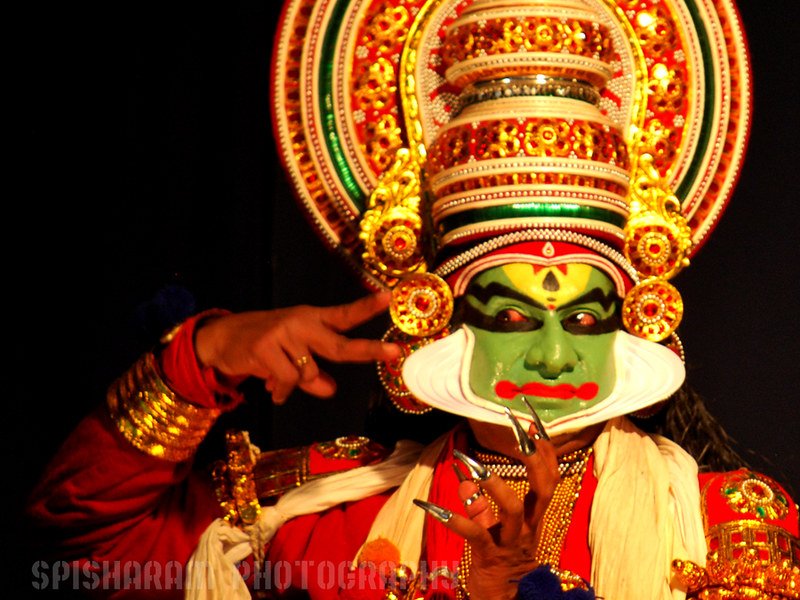 Paccha or the green is for heroes; the good and noble characters. The face is painted with green and surrounded with a white frame-like ridge (made of thick rice paper and it’s called Chutti). Chutti gives an idealized shape to an artist’s face and underlines the expression of the eyes as well as lips. For good characters, lips are brightly painted to draw a permanent pleasing smile. 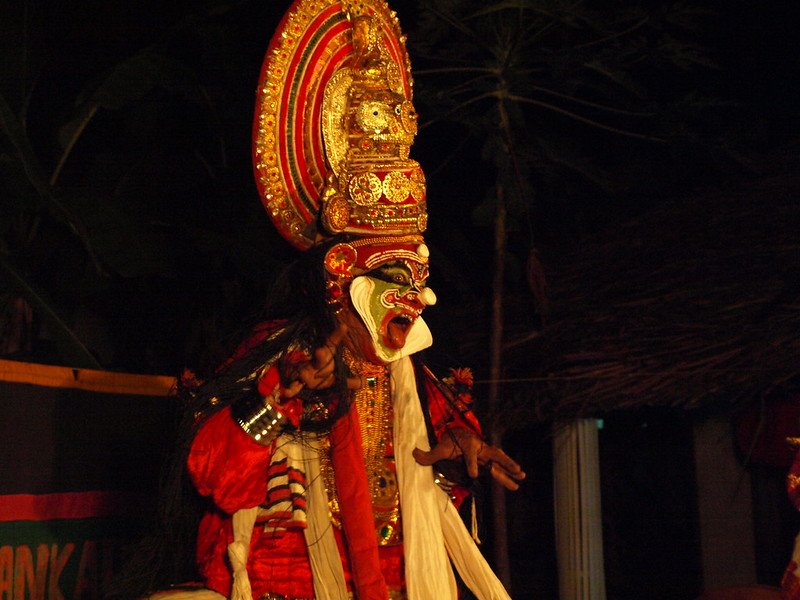 Kathi or the Knife is for villains. In various styles, the positive green color is combined with red to represent aggressiveness and greed. The unrighteous characters such as the demon king Ravana is painted with red and green in the background. A variety of chutti boards can be added to this type of negative character like one on the forehead or nose. 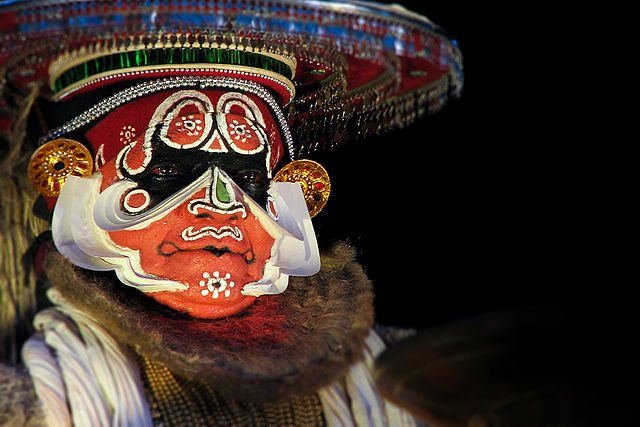 Thadi or the bearded role type who wears a long artificial beard made of wool and Thadi is divided into 3 groups. 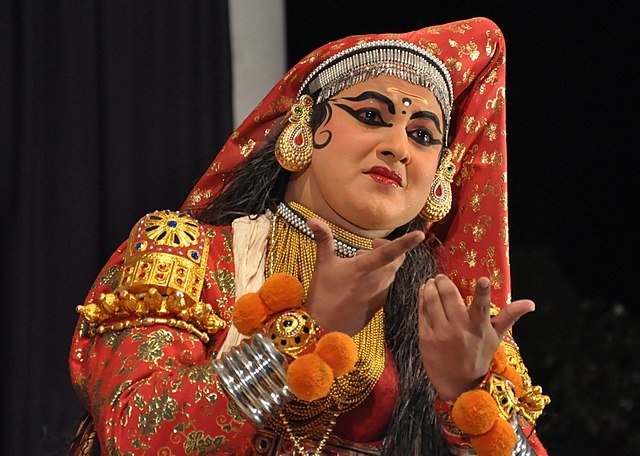 Minukku is for gentle, spiritual, and noble characters such as women, sages and brahmins. They’ve shiny yellowish faces and their makeup is less stylized than the above ones.

Some characters also have enhanced features like an enlarged nose or long mustaches.

For Kathakali, makeup is made from various mineral ores and pigments that are ground on a stone and mixed with coconut oil before applying on the face.

At last, actors put a seed (from a plant) under their lower eyelids to turn their eyes red. This makes their eyes brighter and aids in showing intricate eye expressions.

During the makeup process, the actors slowly transform into the character they play.

Voluminous overcoats, flowing scarves, bulging skirts, classic ornaments, opulent headdresses with streaming hair flowing down till waist and covering the back, and with excellent facial makeup they look ‘out of the world’.

Now the actor is no longer his ordinary self but an embodiment of the character he’s playing. Now he’ll not speak and will remain absolutely in the character.

How Kathakali is performed? 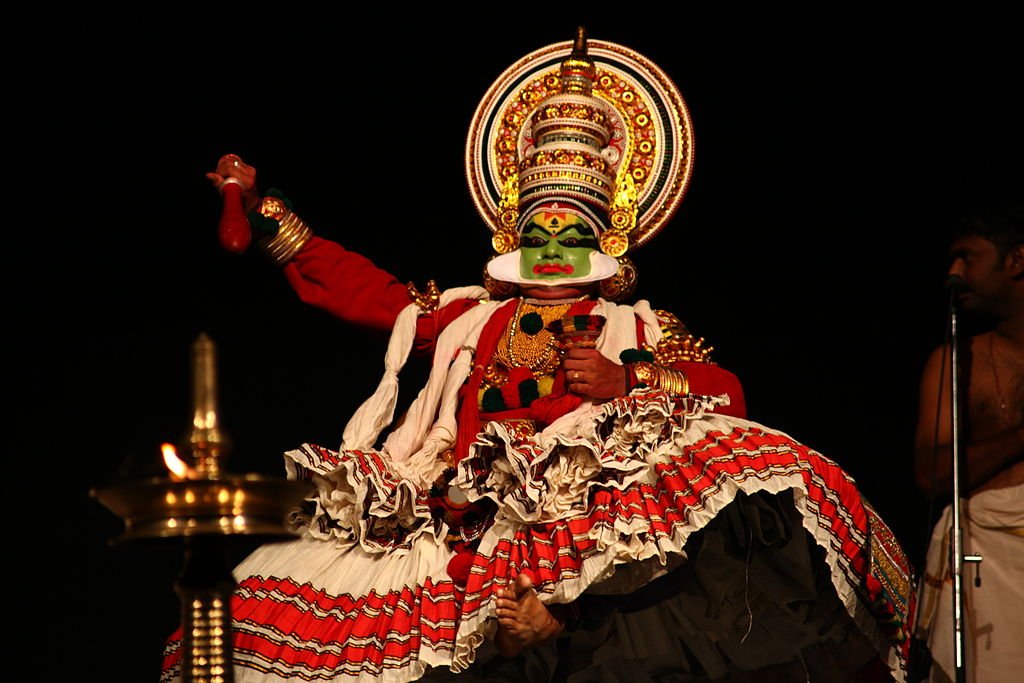 A traditional Kathakali is a whole night show, starts at night and continues till dawn. But, in recent times, when people are too busy, the performances are often shortened to two to four hours shows by selecting the most dramatic or popular part of the story, instead of playing the whole.

Kathakali begins with a loud playing of percussion instruments like Chenda, maddalam, elathalam, and chengila (metallic cymbals) so that it is heard from far. This magical synchronization is called Kelikottu.The Kathakali lovers are much familiar with this.

The show is carried out in front of a Kalivilakku (a lamp which provides light when plays are performed. It is an old tradition followed since Kathakali would play only inside temples).

At first, the important characters are introduced from behind a hand-held curtain. The introduction is carried out according to the type of character. A noble character may simply be revealed while an aggressive character may violently pull the curtain down.

Accompanied by music, the vocalists sing the dialogs from behind the scene while the silent actors vividly translate their words through a language of facial expressions, complex body postures, and figurations of hands and fingers, and especially, with the exaggerated eye movements.

Dancers with their heavy facial makeup, elaborated costumes and ornaments, and lavish headdresses make a magical impression on viewers.

As the play proceeds, the actors recreate history.  Each character expresses emotions with intense vividness. The actors not only express the subjective emotions of the human heart, but give objective impersonations of the characters, scenes, and surroundings.

8 to 10 years of study with training is essential to become a professional Kathakali artist.

Training starts with vigorous physical exercises and body massage with medicated oils. The artists need to attain the right flexibility with a strong backbone in order to perform each hefty step of Kathakali with perfection.

The basic training includes rehearsing of the eye movement in the early morning. And there are separate exercises for brows, lips, mouth, neck, and cheeks. During the daytime, trainees learn body movements, gesture language, and a combination of steps with the coordination of music.

The trainees spend year after year to achieve excellence!

Previous Post
Shigmo Or Shigmotsav in Goa. A Must Watch Fusion of Color and Carnival

Next Post
Petra. Jordan’s stunning city of stone. A must see in Asia!