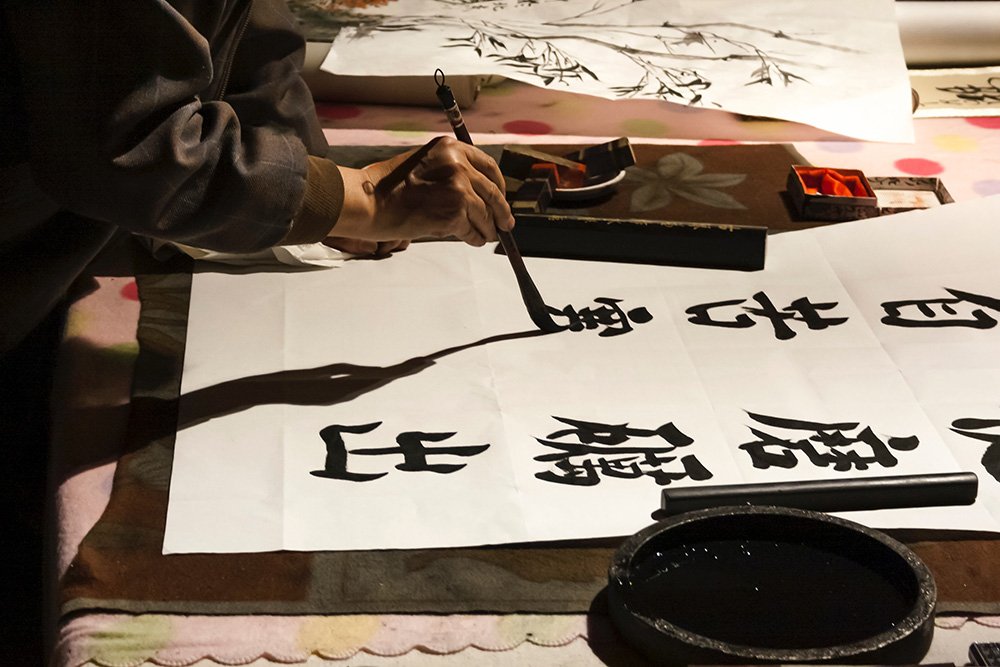 Chinese calligraphy is beautiful artistic writing (of Chinese characters) embodying the artistic expression of human language in a tangible form.

Since the early period, Chinese calligraphy was contemplated as not just a form of decorative art in China, rather, viewed as the supreme visual art form and was more valued than painting and sculpture.

Calligraphy ranked alongside poetry in China as a medium of self-expression and cultivation. Using only brush and ink, calligraphers evolved unique patterns and techniques over decades. 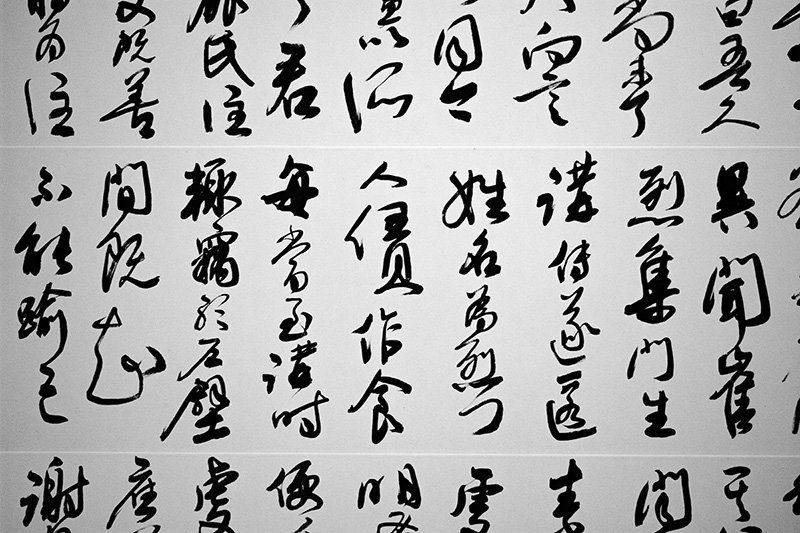 The patterns of Chinese calligraphy

In China, the genre of painting and calligraphy appeared concurrently, sharing identical tools: brush and ink. Yet calligraphy was esteemed as a fine art long before painting. Chinese calligraphy was considered the ultimate art by Chinese educated elite since the Han dynasty (206 BCE-220 CE).

However, if you can’t read Chinese characters, you still can enjoy and appreciate Chinese calligraphy for its visual artistry. To enjoy, you need an understanding of various styles and their traditions, principles of stroke orders and placement, and the philosophy which makes calligraphy the most respected of the fine arts in China.

Before discussing all calligraphic scripts, tools, and techniques,  let us know the history of Chinese calligraphy in brief. How it evolved? And how it became an integral part of Chinese culture and tradition?

Jiaguwen and Jinwen were used by Chinese calligraphers during the Zhou dynasty until 220 BCE.

The earliest existing example of Chinese writing is the inscriptions that were found on Oracle bones (ox scapula or turtle plastron ) and bronze vessels from the Shang dynasty (1600-1046 BCE). Shang is the earliest ruling dynasty recorded in Chinese history. 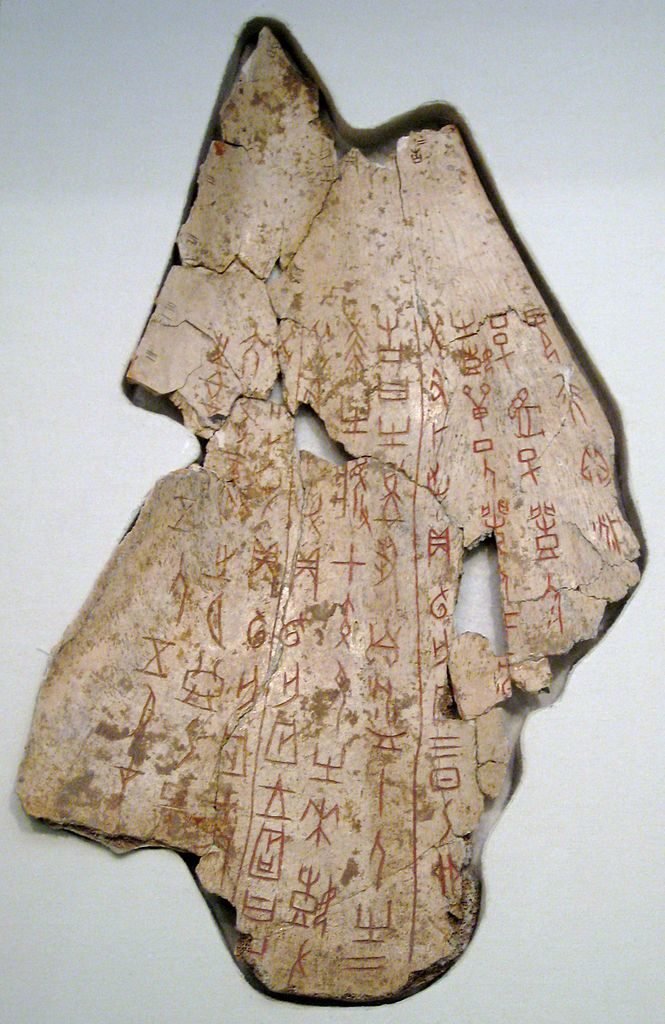 These inscriptions were made on the surface of bones or bronze with a sharp-pointed tool. This process somehow lacked the perfection of true calligraphy. The qualities improved during the Han Dynasty (206 BCE – 220 CE) when Chinese artisans started working with brush, ink, paper, and inkstone.

Archaeological evidence confirms that brushes were known in China much before the Han period, but it was during this time that the usage of brushes became widespread.

Although calligraphy was practiced in its basic forms much earlier from Han period, it was during the Han regime the Chinese calligraphy was duly established (When a series of articles was published towards the end of Han rule).

Chinese calligraphy grabbed the status of an art form during these periods.  Several theoretical studies were published, such as “Bi Zhen Tu” by Wei Shuo (272–349).

The book talked about the concepts of flow and law of calligraphy, brush and ink techniques, and principles for ruling the Yan (the ink container).

During the Jin period, the Kaishu script began to rival Lishu.

Influential publications included “Shu Duan” by Zhang Huaihuan. In which he defined the history and characteristics of 10 separate scripts. And “Shu Pu” by Sun Guoting, which explained a step-by-step study method for Chinese calligraphy.

Famous Works of Calligraphy of the Tang Dynasty (618-907)

Later, during the Song regime (960-1279), the stature of calligraphy declined. There were few notable calligraphic works produced during the three hundred years of the Ming rule (1368-1644). Chinese calligraphy never achieved the height of creativity achieved during Tang and earlier dynasties. 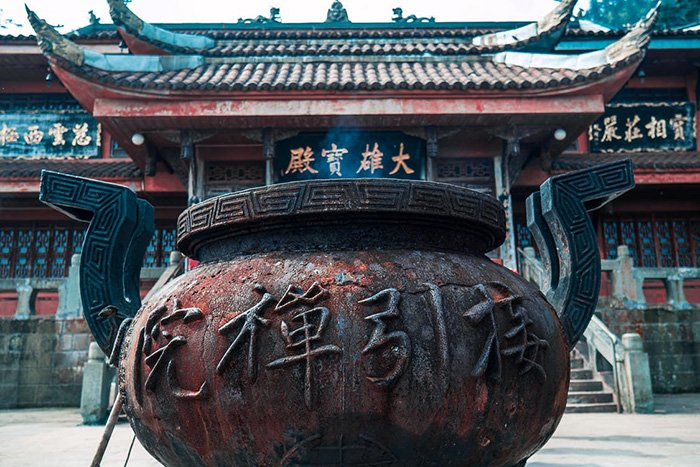 Calligraphy is remaining a potent force in Chinese life today. Starting from the Han reign, Chinese calligraphy is continuing to be a supreme art of literati, associating with painting and the social and cultural life of the educated elite.

Today in modern China, calligraphy is not limited to paper works only. Temples, doors, shops, or banners- you can find beautiful calligraphic work in many places. Calligraphy is an integral part of China’s visual culture.

During 20th Century, usage of calligraphy has radically changed. Calligraphy is no longer an art associated with scholarly elites, in fact, it is a popular art practiced by people from all walks of life. 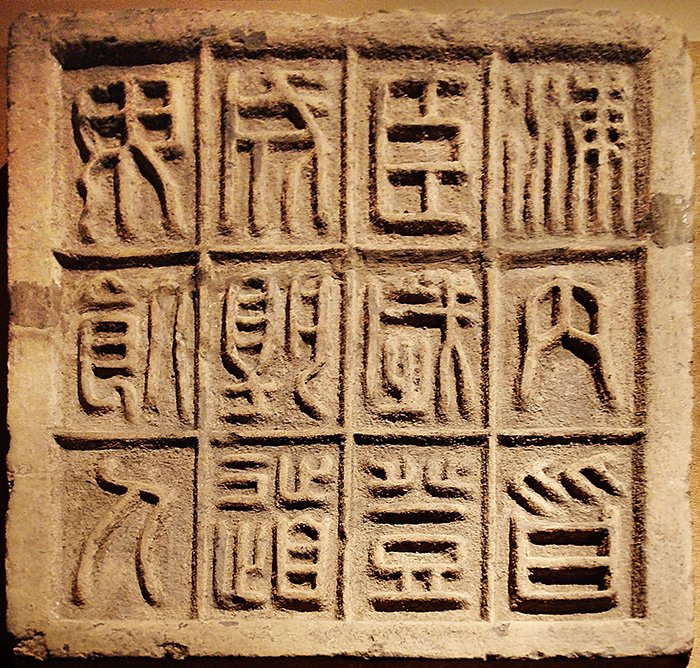 Zhuànshū or simply ‘picture script’ is the most ancient form of writing Chinese characters. This initially evolved during the Zhou dynasty and was adopted as the formal script for all of China during the Qin dynasty.

During the Zhou period, the script style was used for inscribing ceremonial bronze vessels. The inscriptions were also found on animal bones and turtle shells. This popular style for decorative engraving script continued to use widely in the Han dynasty.

Seal script is elegant in style and still liked by people involved in the creation of calligraphy work. 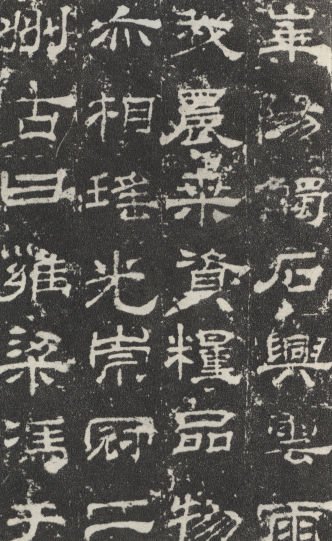 It is an archaic form of Chinese calligraphy. The script type was widely used during the Han period (206 BC–AD 220).

Flexible hair brushes with supple tips produced effective writing that was not attainable in incised characters of Seal script. Somewhat square and angular with emphasis on horizontal strokes, lishu is truly a beautiful calligraphic script type. Characters were uniform in size and evenly spaced within a composition. However, the style greatly varied for individuals.

Written characters on bamboo slips or carved in stones still survive as examples of Han popularity.

Due to ease in readability to modern readers, this form is still widely used in a variety of applications such as news headlines, signboards, and commercial advertisements. 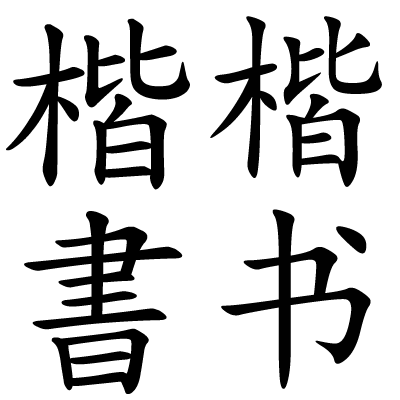 It is the newest of the Chinese script styles. With clear-cut corners and straight strokes of varied thickness, the Kaishu script went through a crucial period of development and was the most important type of script during the Tang dynasty (618-907). During this time, the civil service candidates were graded on their calligraphic skills along with other traits. The way they used brush and ink showed the strength of their personality.

This form of calligraphy remains as the standard script today. 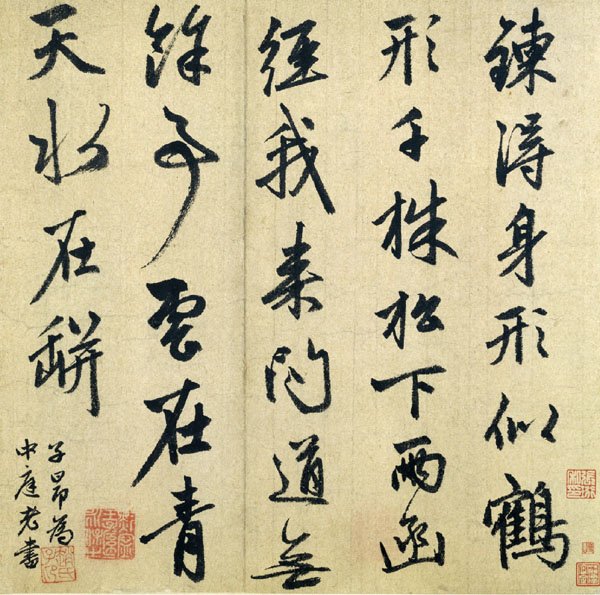 The semi-cursive Chinese script developed out of the Lishu script from the Han dynasty. The character of xingshu are not shortened or connected, but strokes within the characters are often run together. They come with fewer rules and conventions. In a running script, calligraphers may add their style and approach.

This writing style can be found from a write-up ‘The preface of the Orchid Pavillion’ written by Wang Xi Zhi’s (303-361 CE). 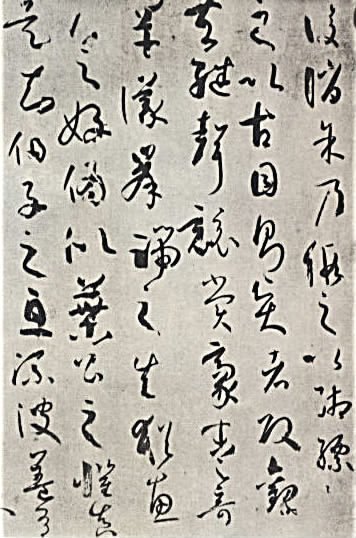 This form is the most abbreviated and spontaneous. Caoshu is a cursive variant of the standard Chinese script lishu and kaishu.

This script style developed during the Han dynasty (206 BCE–220 CE), and it witnessed the greatest growth during the Tang dynasty (618–907).

In caoshu, the numbers of strokes in writing characters are lessened to single scrawl or abstract abbreviations of curves and dots. Strokes of varying thickness and modulation show a great variety of shapes.

Caoshu is not bound by rules for even spacing, and characters need not be of the same size. The calligraphers thus have the absolute freedom of expressive movement of the line.

A calligrapher makes synchronization between brush, paper (or Silk), and ink by controlling character size, the contrast between light and dark, and speed of application to produce beautiful calligraphic lines.

The technique for Chinese calligraphy

The technique is simple. A calligrapher starts with a cake of carbon-based ink, which he grinds on an inkstone. A dropper is used to add water and to dilute the ink. A flexible animal-hair brush is then dipped into the ink solution and is used to create beautiful calligraphic lines on paper or silk. These are simple materials, but using them skilfully calligraphers achieve huge variations in works.

In the formal scripts, the brush is filled often, placed with care, and moved carefully, resulting in consistent brush strokes.

Even in the most cursive scripts, the skilled calligrapher establishes rhythm, flow, and balance which appears to be a completely spontaneous work.

The tools for Chinese calligraphy 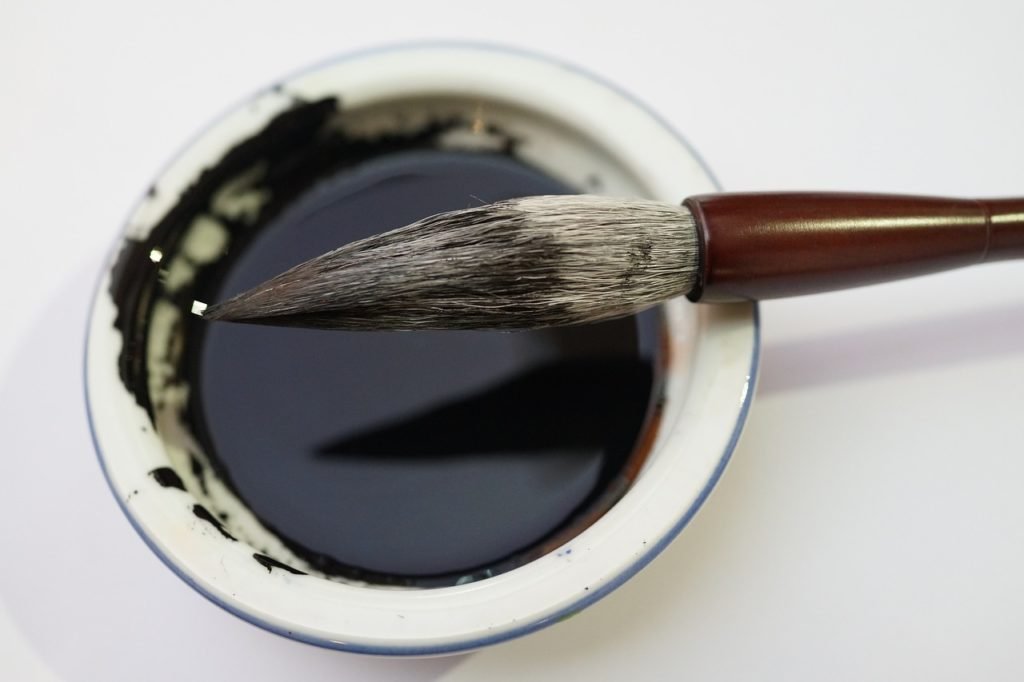 Brush, paper, ink, and inkstone are essential tools that are used in Chinese calligraphy. They’re togetherly known as the ‘Four Treasure of the Study’ in Chinese and other East Asian calligraphic traditions. In addition to these four, a water-dropper, desk pads, and paperweights are also used by calligraphers.

Brush: a brush consists of a bundle of animal hairs (black rabbit’s hair, white goat’s hair, and yellow weasel’s hair were popular choices). The body of such brushes are made of bamboo, and wood, (porcelain, horn occasionally). The hairs are not all of the same lengths. The inner core has shorter hair covered by an outer layer that tapers to the tip. These brushes are highly flexible and come in a variety of shapes and sizes which determine the type of lines produced

Today, however, calligraphy may also be done by using a pen.

Note: The invention of paper is widely appreciated as China’s major technological contribution to the world.

Paper was made from fibers like mulberry, hemp, and bamboo, and provided a cheaper alternative to silk as a material for calligraphy and painting.

Some special types of papers such as Xuan, Maobian, Lianshi were preferred by calligraphers. However, any modern paper can also be used for calligraphy writing.

Paper is often sold together with a paperweight and desk-pad.

Ink: the ink used in calligraphy is made from lampblack (a sooty residue produced by burning Pine resin or oil under a hood). The lampblack is then mixed with glue and pressed into molds resulting in hard cakes or sticks. These hard sticks are then grounded against an inkstone and mixed with water. This process helps calligraphers to control the thickness of the ink.

Inkstones are generally made of stones, ceramic, or clay. Inkstones are used to grind solid ink-sticks into liquid. Chinese inkstones are highly prized and appreciated art objects.

The Chinese written scripts are made up of thousands of individual graphs. Each consists of an invariant group of strokes implemented in a set order.

The viewers can retrace stroke by stroke the exact steps followed and extremely fine lines of execution whether a stroke was made swiftly or slowly or the brush was applied with delicacy or force.

More you look at a piece of Chinese calligraphy, more you appreciate its flow and structure irrespective of your relationship with the Chinese language.

Next Post
Taj Mahal, A Paradigm Of Love With Breathtaking Architecture