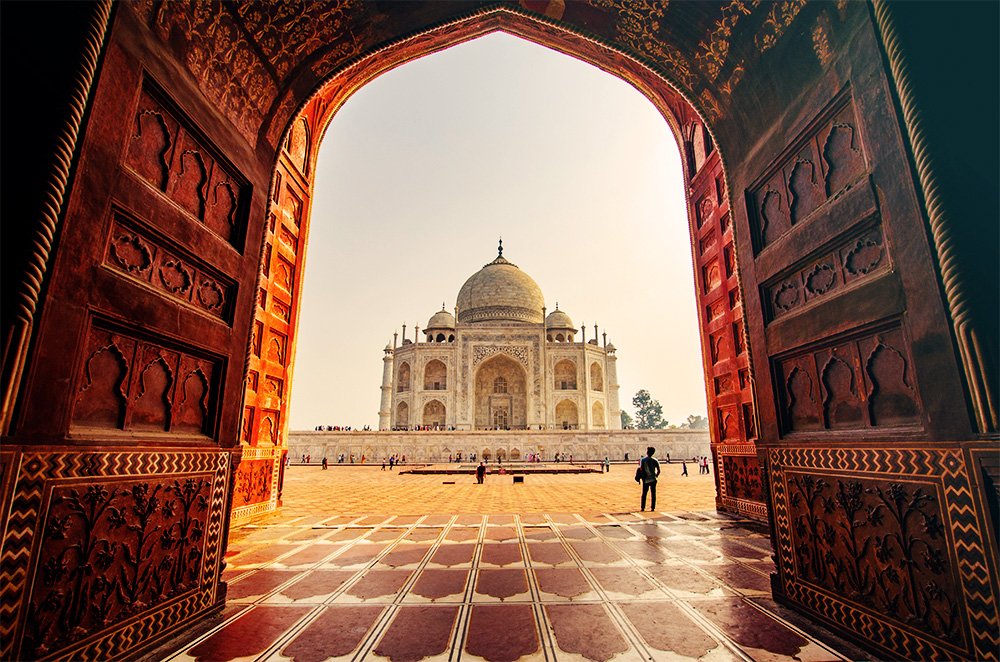 Taj Mahal, A Paradigm Of Love With Breathtaking Architecture

At the bank of the river Yamuna in the Indian city of Agra, Taj Mahal, one amongst the world’s wonders, stands majestically as the legend of eternal love of an emperor for his queen.

Taj Mahal is an enduring monument of love was built by the Mughal Emperor Shah Jahan to house the tomb of Queen Mumtaz Mahal and preserve precious memories of her.

This colossal tomb is crafted in soft and pure marble and adorned with precious stones is the centerpiece of the huge 42 acres Taj premises.  Taj Mahal is among the finest establishments of Mughal architecture.

At the verge of dawn, when sun’s rays hit the dome of this epic monument, Taj Mahal shines heavenly cloaked in bright golden. At dusk, bathed in the glory of moon, Taj dazzles like a flawlessly curved diamond.

Every year 7 to 8 million visitors pass through the huge gate of Taj Mahal to get a glimpse of this breathtaking architectural monolith. 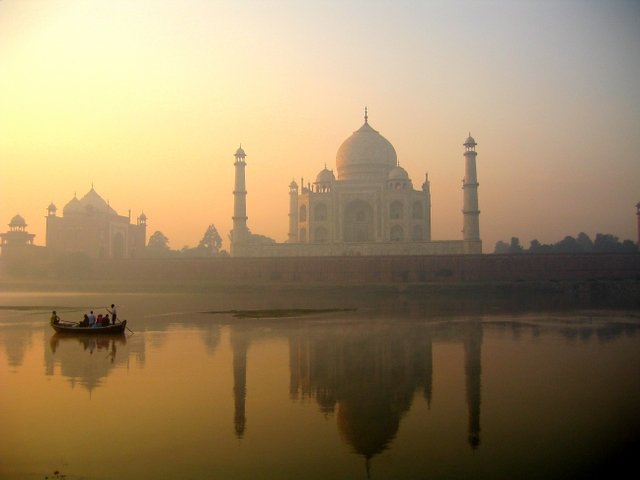 A tranquil view of Taj

However, until you know the love story behind the creation of Taj Mahal, it will remain to you as another beautiful historic architectural monument and the unmatched beauty of Taj won’t enliven in your heart and mind.

It’s the love story of the emperor Shah Jahan and Queen Mumtaz Mahal behind this historic creation that gives an aura to the Taj and makes it unique.

Here, we’ll unfold everything about Taj Mahal: starting from its history, the mind-blowing architecture, unforgettable love of an emperor, and how to visit Taj Mahal today.

History behind the creation of Taj

Taj Mahal, an epitome of love, was built during the reign of great Mughal emperor Shah Jahan (he was the fifth Mughal emperor and ruled from 1628 to 1658). During Shah Jahan’s period, Mughals were at the peak of power and wealth.

Shah Jahan was the son of Mughal emperor Jahangir and grandson of the great king Akabar. In 1612, Shah Jahan got married to a Persian girl Arjumand Banu Begam. Initially, it was an arranged marriage for political reasons. But soon, Shah Jahan fell in love with her and their love story was written on the pages of history.

After marriage, Arjumand Banu Begam was named as Mumtaz Mahal (by Shah Jahan).

Mumtaz was the impartible consort and favourite queen of Shah Jahan (among his three wives). In 1631, while giving birth to their fourteenth child, Mumtaz died. Dipped in sorrow, the emperor built the opulent Taj, a mausoleum to house the body of his loving wife Mumtaz Mahal.

Taj Mahal shows a deep love shared between two people. Here a husband lost his wife, but he made sure that the loving memories of her will never fade away. 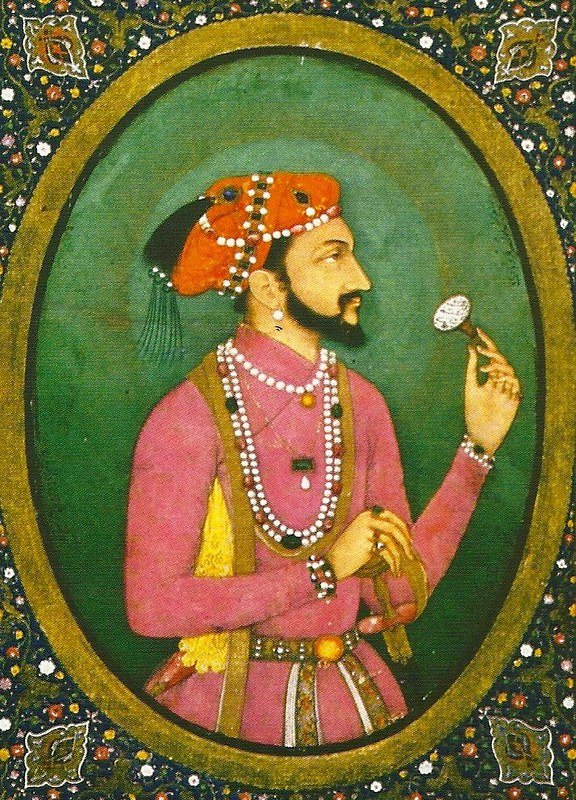 A portrait of Shah Jahan 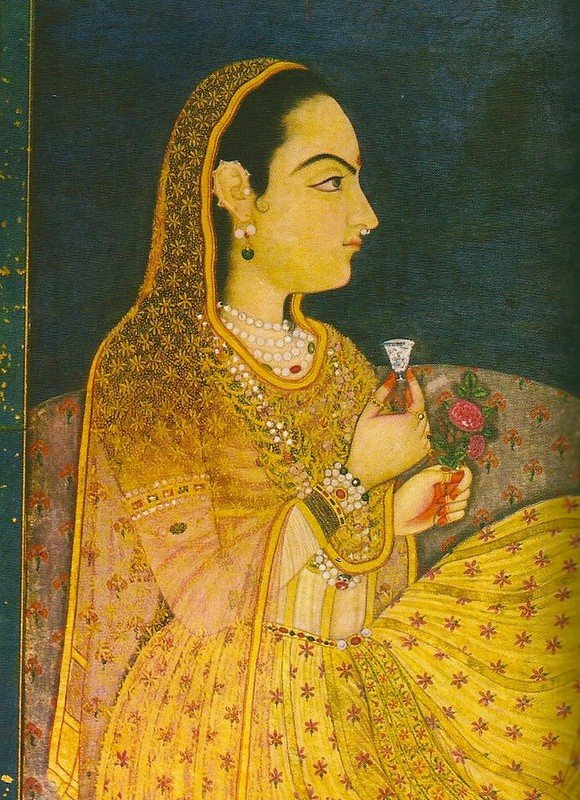 A portrait of Mumtaz Mahal

With a fusion of Persian and Mughal architecture, the Taj Mahal is the gem of Islamic art in India and one of the universally admired masterpieces of the world’s heritage.

The work started in 1632. More than 20000 laborers including masons, artisans, inlayers, carvers, painters, calligraphers and 1000 Elephants contributed their labor approx. for 22 years to build Taj Mahal the way you see it today.

The skilled artisans and laborers were called from all over India, Central Asia, and Iran. The Elephants transported materials used. The chief architect for building Taj Mahal was Ustad Ahmed Lahori, (who was also the chief architect for the historic Red Fort in Delhi, the capital of India).

Taj visibly displays a blend of Indo-Islamic art and architecture.

Taj Mahal was built in white translucent marble which was imported from Makrana, Rajasthan (a northern Indian state). It’s the essential quality of the marble that Taj reflects in different shades during the different times of a day: a little pinkish in the morning, flawless white during the daytime, and golden in the evening when moonlight drop down on earth. Taj has many shades during different hours in a day and during different seasons in a year. 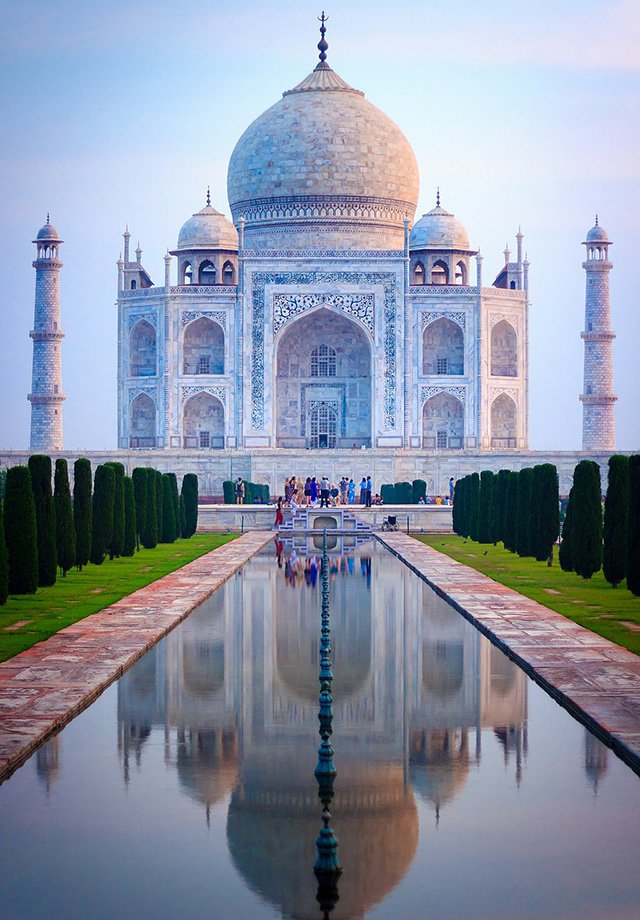 Many precious and semi-precious stones were brought from many parts of Asia including China, Tibet, Afghanistan, Sri Lanka, the Arabian Peninsula (the center for exporting precious stones), and Jaisalmer, Rajasthan.

These precious stones were inlaid skilfully on the walls of Taj along with making beautiful floral patterns. Craftsmen used forty different types of stones to inlay patterns (amber, coral, jade, lapis lazuli and so on).

Note: during the British rule in India, these precious stones were chiseled out by British soldiers. Later, the empty spaces were filled with alternative semi precious stones.

Beautiful calligraphic inscriptions were also lined on the walls using a flowery thuluth script (Thuluth: a type of Islamic calligraphy). This was created in Jasper or black marble and set in white marble panels. The verses of the Quran were written on the walls through calligraphy.

These calligraphic designs are seen inside and outside of the mausoleum.

A calligraphic expert at that time Amanat Khan created all calligraphic designs of Taj Mahal. Among all other workers and artisans who worked for Taj, it is only his signature that’s inscribed on the main door of Taj Mahal. 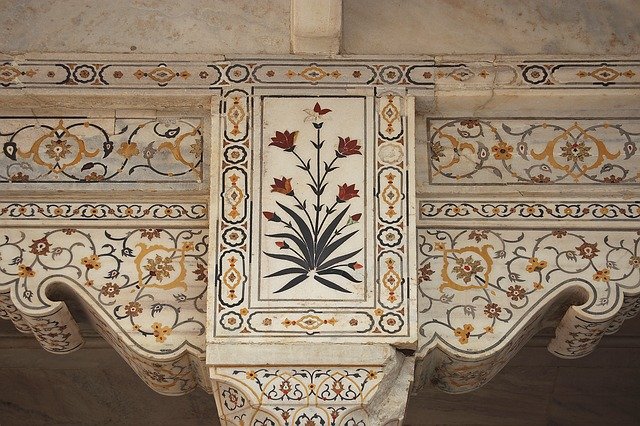 An archway of Taj Mahal

The same types of flower patterns and calligraphic work are also seen on the walls of the other two monuments inside the Taj premises (a mosque and a guesthouse).

Foundation was a challenge

Taj Mahal was built at the bank of river Yamuna. Therefore, the biggest challenge was to build a concrete foundation on which this wonder of the world could stand. To support the heavy load of this huge architecture, the sand of the river bank had to be steady. Many deep wells were dug reaching below the water level and cased in wood and filled with rubble, iron, and mortar; thus acted as concrete pillars. A 624-feet-long plinth was made.

Today, the giant structure of Taj Mahal and two other red sandstone buildings (the mosque and the guest house) are residing on this concrete foundation. An aerial view of Taj Mahal

Significance of the structure and area of Taj Mahal

It’s a huge 42-acre land. The royal mausoleum crafted in soft and pure marble is the prime feature of the place where in the serenity of paradise rests the Queen in peace with her king.

The premises are bounded on three sides by crenelated walls and the riverside is left open. Inside, there’s a vast garden with many fruit trees and exotic plants, fountains, and a pool reflects the beautiful image of Taj Mahal.

There’s a mosque on the one side of the Taj and a guest house on the other.

Taj Mahal is a perfectly symmetrical building topped by a large dome with a finial. This dome is the crowning glory that makes Taj so timeless and graceful.

It was raised layer by layer putting mortar between stones that gave it stability to float over the marble facade (without support of struts or columns).

The dome is more than 40 meters high and 4 meters thick. Its weight is transferred downward to the mass of masonry below. For over 350 years the dome has been the ultimate expression of Mughal architecture.

There are four minarets in all four corners of the Taj. An analysis done on these minarets in the1980s revealed that each one was built to lean away slightly from the main tomb so that in the time of earthquake, the minarets would collapse outwards sparing the Taj and its mighty dome. 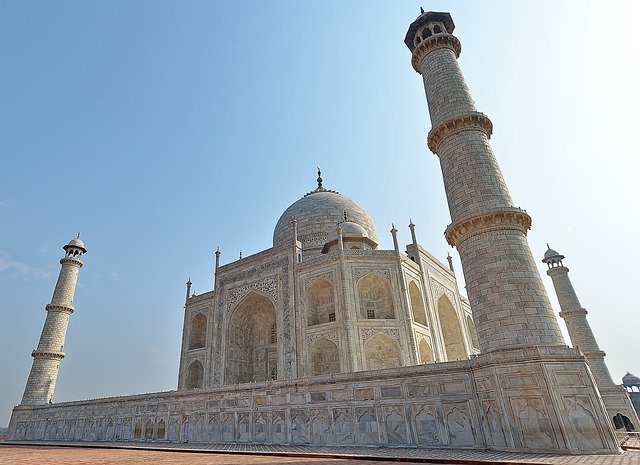 The Taj with minarets

When you visit Taj, you experience that the architects used some remarkable optical tricks. The first view of the Taj is framed by the main gate. As you move closer to Taj, it seems to get smaller and grow bigger as you walk away.

An optical trick was in the building of minarets too. As the four minarets are leaning slightly away from each other, but while looking at them they look perfectly vertical.

It took more than 22 years to complete the Taj Mahal and cost around 32 million rupees (of that time).

Soon after the making of the Taj Mahal was completed, Shah Jahan lost his throne. He was put under house arrest in Agra fort (not far from Taj Mahal) by his son Aurangzeb. Till his last breath in 1666, Shah Jahan kept staring at Taj, the loving memory of his loving wife, from a window of Agra fort.

After his death, Shah Jahan was also entombed in Taj Mahal beside his wife.

In 1983, the Taj Mahal was recognized as one of the UNESCO World Heritage Sites and Taj is also amongst the world’s wonders.

Taj Mahal is situated in Agra in the state of Uttar Pradesh, India. It’s approximately 200 kilometers from Delhi, the capital city of India.

The best time to visit Taj Mahal is between November to February when it’s winter in Eastern countries. In other times of the year, it might be too hot to keep your feet on the floors of the Taj Mahal (visiting the sanctum in the main tomb, you aren’t allowed to wear shoes) or it can be rainy in the middle of the year.

However, if you’re in Agra, it’s worth visiting the Taj Mahal early in the morning when the first rays of sun hit the dome of Taj. Taj shines majestically!

And you can also avoid the crowd that starts arriving later in the morning.

The Taj Mahal is open for its visitors from morning 6 to evening 7. (Except, Friday when Taj is closed for prayer).

Other than that on every full moon night along with two days before full moon and two days after (total for five days), the Taj is open at night from 8:30 pm to 12:30 am., so that you can admire the magical beauty of Taj in the glory of the moon.

(In the holy month of Ramadan, night view of Taj is restricted and then you cannot enter).

Do you know about the sacred practice of Ramadan? Know here

The city of Agra is well connected by rails, high-speed expressways, and air services (from different cities of India).

If you are in Delhi in the capital city of India, the Taj Mahal can be visited on a day trip. There’s the Yamuna Expressway, a faster route that connects Delhi and Agra. Taking the route you can reach Agra within 3 hours.

Every day countless visitors are enthralled by Taj. Words can’t do justice with the beauty of Taj. To realize it, you have to land on this piece of paradise.

Next Post
Asia. The Incredibly Beautiful Land On Earth