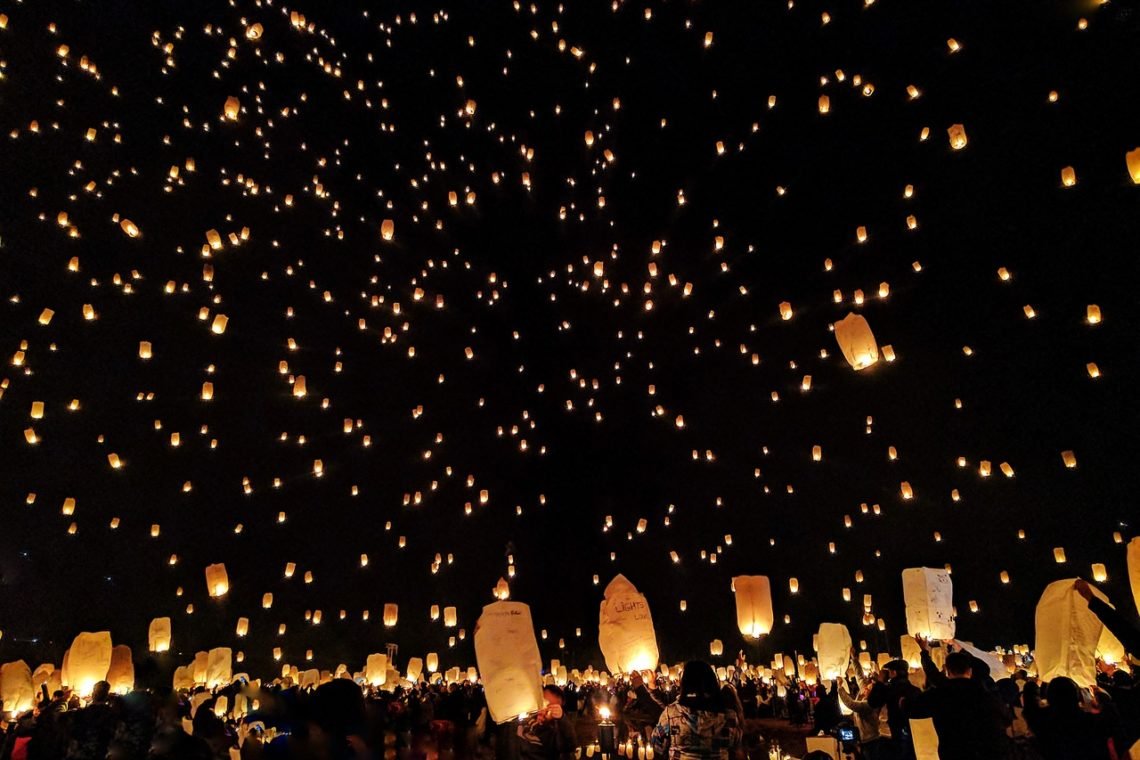 On the fifteenth day of Chinese New Year, also the very first full moon night of the Chinese calendar, the event is hosted by the Tourism Bureau of the Ministry of Transportation and Communication, Taiwan.

It is the grand finale of the Chinese New Year. The festival is also known as Yuan Xiao Jie, symbolizes welcoming spring.

The Lantern festival in Taiwan is celebrated with fanfare events including the Pingxi Sky Lantern Festival in New Taipei city,  Bombing of Lord Handan in Taitung, and Yanshui Beehive Rocket festival in Tainan, to welcome the New Year with peace, prosperity, and joy.

Taiwanese celebrate Lantern festival with displaying lights in temples, thousands of floating lanterns in the sky, and by burning lots of firecrackers.

Traditionally, at the beginning of planting season, farmers would write messages on a sky lantern praying for a plentiful harvest and would release it to the sky to reach it to God, to the heaven.

Eventually, this ritual of releasing sky lanterns grew into a mega event in northern Taiwan, and became Asia’s one of the largest festivals that attract millions of tourists across the world.

This is a magical event where thousands of glowing lanterns float up in the night sky to create an ethereal view that will live in your heart forever!

When and how is the Lantern Festival celebrated?

On the fifteenth day of Chinese New Year, this wonderful event is hosted by the Tourism Bureau of the Ministry of Transportation and Communication, Taiwan, as the grand finale of the Chinese New Year.

Pingxi Sky Lantern Festival is one of the most colorful activities among them. 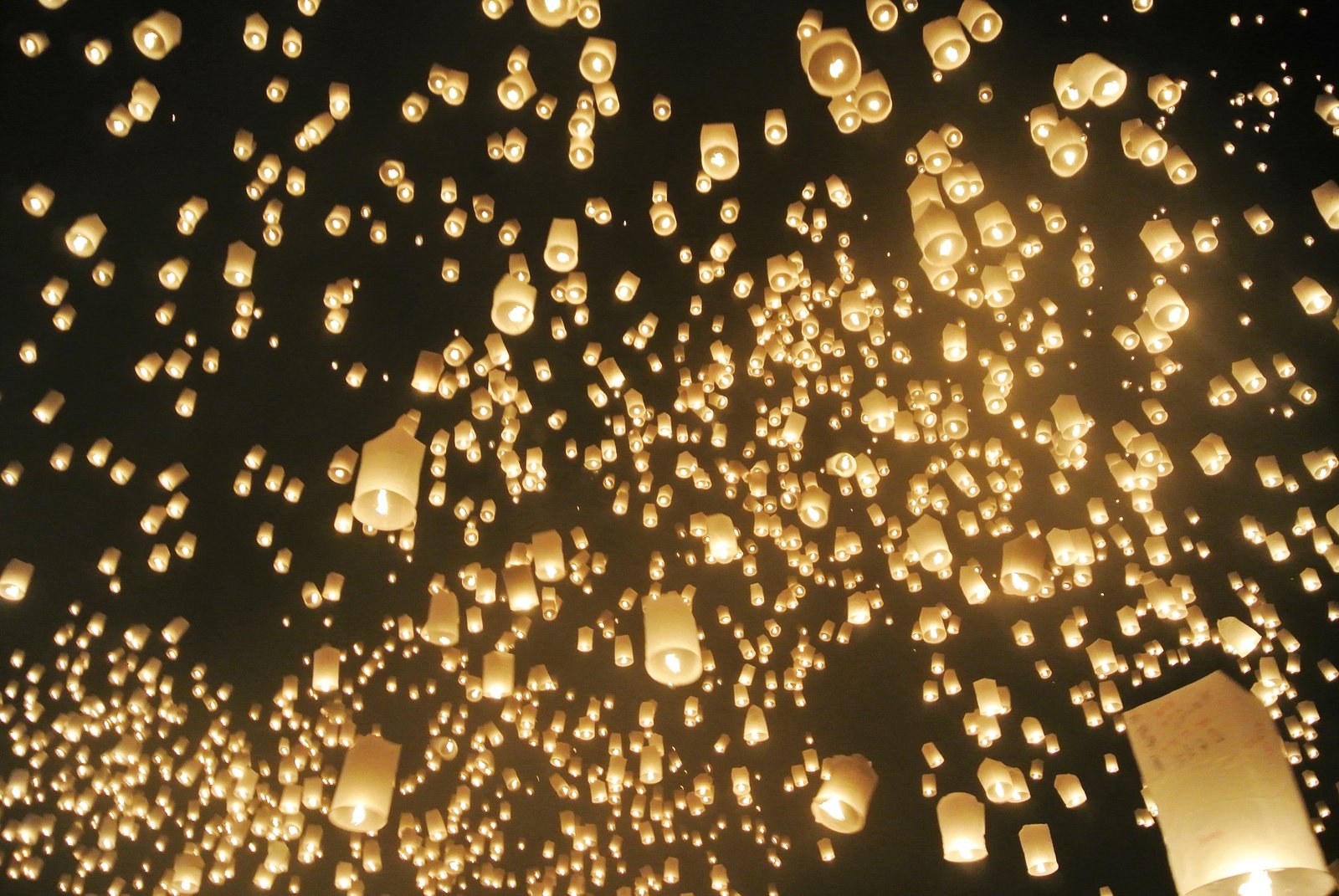 Lanterns in the night sky

It’ll be a magical experience for you watching thousands of glowing lights floating up in the night sky above the small hillside village of Shifen in Pingxi (a district in northern Taiwan).

The Lantern Festival in Pingxi is steeped in ancient tradition. And Taiwan’s Lantern Festival is relatively new, was recently started by the Taiwan Tourism Bureau to attract tourists and increase in tourism revenue.

This festival is celebrated on the first full moon night of the Chinese New year. Every year, thousands of visitors reach in Pingxi and release an estimated 100,000 to 200,000 floating lanterns for this occasion.

These lanterns are fabricated with oiled rice paper on a bamboo made frame containing a small candle or fuel cell composed of waxy flammable material. When lit up, the flame heats the air inside; the same principle of hot air balloon which raises the lantern up in the sky.

People write their wishes on lanterns. They believe as the lanterns fly high in the sky, these will pass their messages and wishes to god in heaven.

The ancient practice has made Pingxi a hugely popular tourist destination.

If you believe in folklore, in the past, Taiwanese who worked or farmed on the mountains had risks of being robbed or killed. They used to float lanterns in the night sky to inform their families that they were safe. Those floating lanterns were the signals of their safety.

Also, Taiwan historically belongs to Chinese society which was agricultural and deeply religious. They had a strong respect for their ancestors and God. So, they believed in praying to them for better harvesting every year.

Thus, at the beginning of harvesting season, while welcoming spring, farmers would write their wishes on paper lanterns and sent them to the sky.

Today, this practice of releasing sky lanterns is the most popular festival in Taiwan.

Every year during the Sky Lantern Festival, another distinctive celebration takes place in Taiwan (in Taitung City). It’s popular as the Bombing of Lord Handan. 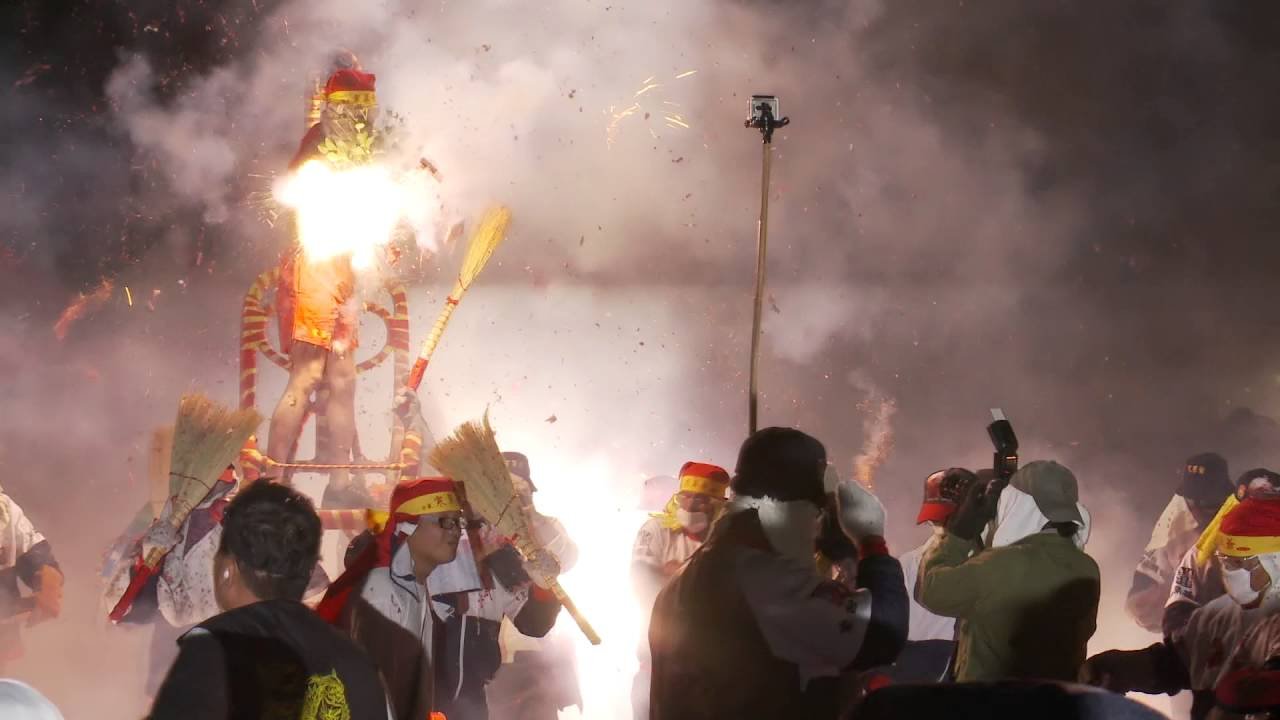 A divine procession of Lord Handan comes out on the streets of Taitung. And a massive crowd follows him and offers fresh flowers, fruits, and firecrackers to receive his blessings. Lord Handan is revered as the God of wealth.

With the religious belief, he comes out for an annual inspection of the celestial treasury.

During the celebration, a man plays the role of Lord Handan. He stands on a sedan chair and being carried by four devotees. People throw firecrackers on him.

You’ll be surprised to see that the man wearing only a headscarf and a pair of red shorts, and protected only by a tree branch is standing courageously amidst the shower of firecrackers.

There’s a belief in Taiwanese that Lord Handan cannot bear cold weather, and throwing firecrackers will keep him warm. He will be pleased and bless them with wealth and prosperity.

It might sound scary to you, but the Taiwanese have deep faith in it.

There’s another story about why people throw firecrackers on him. People consider Lord Handan as the god of hooligans, and his power grows with the power of explosions.

In Taiwan’s history, Lord Handan once was a real person with magical powers named Zhao Gong Ming who fought against the Shang dynasty and later became the leading God of Wealth in Chinese mythology. 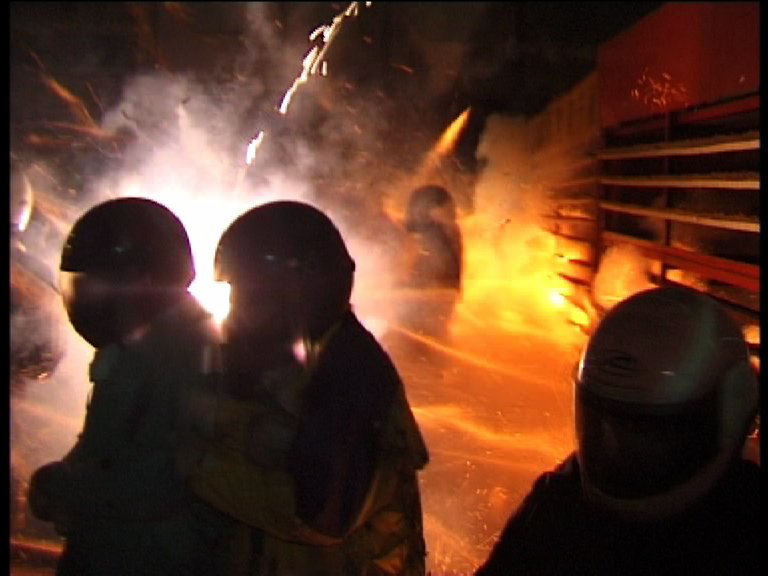 It’s amongst the world’s most dangerous firework festivals that takes place in Yanshui, Taiwan.

If you believe in folklore, in the past, the festival was started in the late nineteenth century to combat a dual disaster of the Plague and Cholera epidemic which afflicted the city for two decades.

To overcome the worse, the people of Yanshui requested Guan Gong (the Chinese God of war) to end their suffering.

The martial god said he would visit the town and would like to be greeted by fireworks.

People burnt thousands of firecrackers to please Guan Gong. And in the end, the sulfur in the fireworks killed bacteria, and the loud noise of the explosion scared away the rats that carried the germs for the diseases.

Following the tradition, every year during the lantern festival people gather in Yanshui to celebrate the occasion enthusiastically.

They wear fire-retardant clothes, thick gloves, and helmets and stand between beehive structures loaded with fireworks. The mob hops anxiously finding them in between the beehives that are to be set on fire.

This is undeniably the world’s most dangerous celebration. These beehives are launching towers densely stacked with small stick-like rocket fireworks. They are made as beehives because once the tower is lit, thousands of rockets shoot out at the same time like a swarm of bees is being stirred from a nest. Started with splutters of sparks soon erupts into a roar of flaming projectile that rush into the crowd or screech overhead.

How did the festival gain so much popularity?

In 1990, Taiwan Tourism Bureau hosted a mega lantern festival. This was to coincide with the age-old ancient practice of releasing sky lanterns in Pingxi to increase in tourism revenue.

This was first held in Taipei’s Chiang Kai Shek memorial hall. Since then, Lantern Festival gained much popularity. The event changes its location every year in different cities of Taiwan to attract more visitors from the different parts of the country.

The Discovery Channel honored Taiwan’s Sky Lantern Festival as one of the best festivals from around the planet. And the National Geographic included it in the list of 10 best winter trips worldwide in 2016.