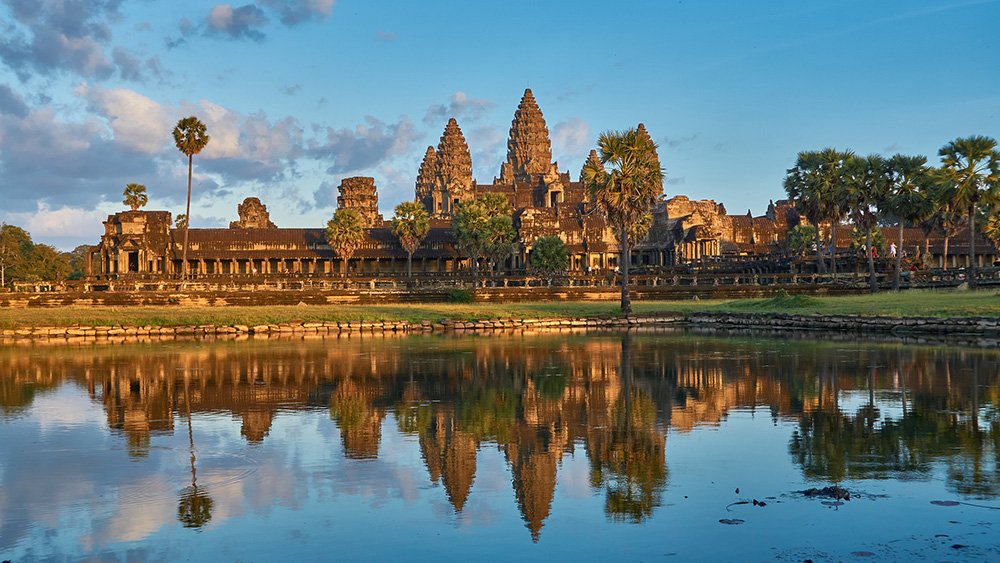 Angkor Wat, the ultimate expression of the Khmer Empire ( 802-1431 ), is the world’s most astonishing and enduring architectural feat ever. In its nine hundred years old remains, the footprints of an extraordinary ancient culture is revealed.

Deep in the forest of Cambodia, the magnificent spires of Angkor’s ancient temples soaring high as the fierce national pride for the country. (appearing on Cambodia’s National flag)

Angkor Wat is one of the most important archaeological sites in Southeast Asia gives evidence to the existence of a highly developed civilization of that time.

Angkor Wat is not less than a mystery and its size and purpose baffling! 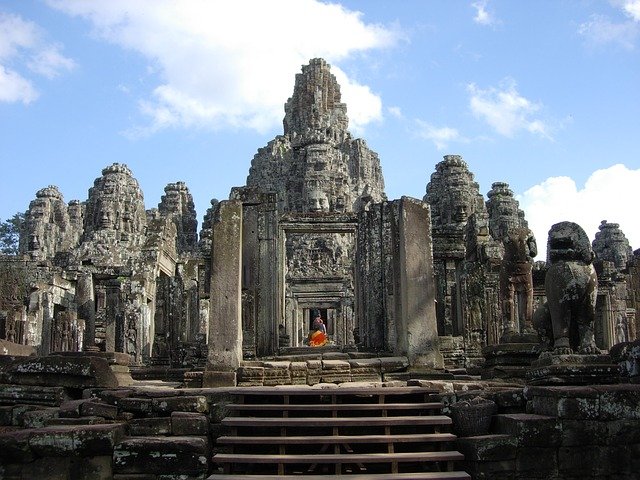 Today’s Cambodia is the inheritor state to the mighty Khmer Empire which during the Angkorian period was ruling much of what are now Laos, Thailand, and Vietnam. The temples of Angkor give witness to the Khmer’s resourcefulness and their extraordinary architectural skills.

Angkor Wat was built by Suryavarman II (one of Khmer’s greatest kings in the early 12th century). Angkor Wat, geographically, lies in the North West foot plains of Cambodia just above the great lake.

It is in the North-Western region of Cambodia and only 4 miles away from the city of Siem Reap.

Every king from this great empire tried to better their ancestor’s structures in size, scale, and symmetry. The Khmer dedicated Angkor to the Hindu God Vishnu. Later at the end of the 12th Century Angkor Wat witnessed much of Buddhist culture and practices inside its grand premises. 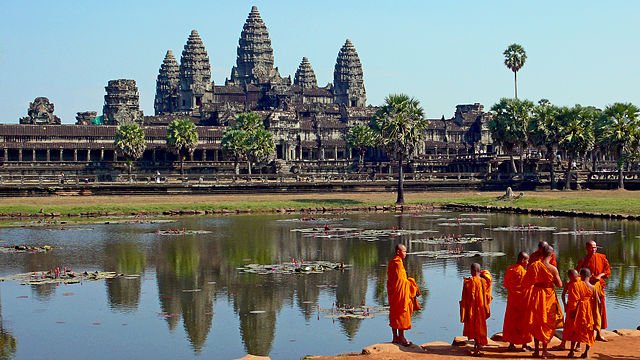 However, for centuries, Angkor was the center of the Khmer kingdom. With spectacular monuments and skilled urban plans, it was enclosed with large water reservoirs, canals, dikes, and routes for communications. Archaeological evidence said that their intricate water management system helped to produce wealthy crops like rice.

Angkor Wat today testifies to an exceptionally developed civilization of that time that had an urban core that could easily have held 500000 people.

However, more than 500 years ago, people fled this grand city. Angkor slowly fell into disrepair and the once magnificent engulfed in the deep jungle.

Why did the Khmer abandon the place has some speculation.

Scholar said that the downfall to the Khmer’s water management system led to an end to this mighty empire. A series of weak monsoons decreased the water level of the surrounding moat (that had helped the foundation of this grand structure and supported human settlement). And people had to leave Angkor to support survival.

Extending over an area of more than 400 square kilometers, Angkor Wat is gigantic. Angkor’s hundreds of monuments are constructed with approx. 10 million sandstone blocks each with 1.5 tons. The city of Angkor contains more stones than the Egyptian pyramids.

The buildings were laid out on a vast scale stone and it stretched on and on. Its high rising towers shaped like a lotus as if they are trying to reach heaven.

Its grand walls and endless corridors are richly decorated with carvings and sculptures. The carvings depict the historic events and stories from mythology. 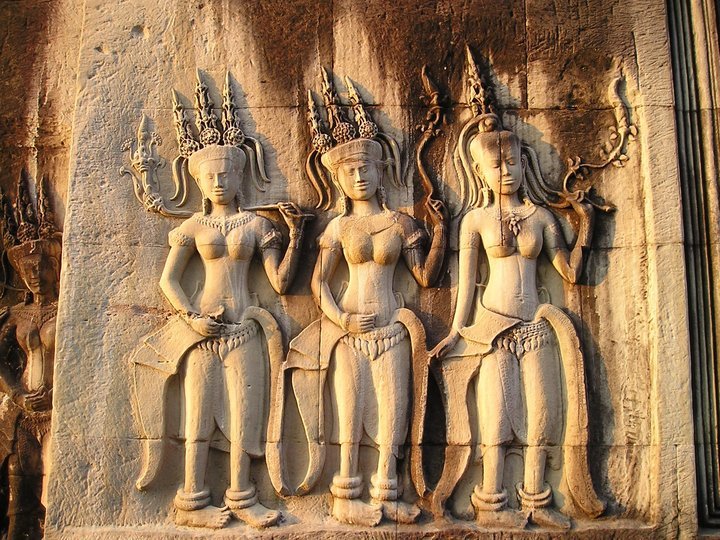 More than 3000 Apsaras (heavenly nymphs) are carved into the walls of Angkor. Many of them were damaged while cleaning the temple complex with chemicals in the 1980s. However, later they were restored.

Its precise construction would be hard to match even with modern technologies.

A 213 feet tall central tower is surrounded by four smaller towers and a series of enclosure walls, where a 650-foot-wide moat bordering the temple complex which forms a giant rectangle to protect the land from invaders. And there’s a 475m long and 9.5m wide sandstone causeway that crosses the moat.

This image portrays the picture of Mount Meru (In Hindu mythology, Mount Meru is the home of gods that’s believed to lie beyond the Himalayas). Here’s the five towers recreate the five peaks of Mount Meru and the surrounding moat gives you an insight of the holy ocean neighboring the holy mountain.

How was Angkor Wat built?

Angkor Wat was built by sandstone blocks that were excavated from the Phnom Kulen (a mountain that’s 50 km away from the site) and floated down the Siem Reap river on rafts. The inscriptions said that the construction of huge Angkor involved 300000 laborers along with 6000 elephants. It took 30 years to complete. 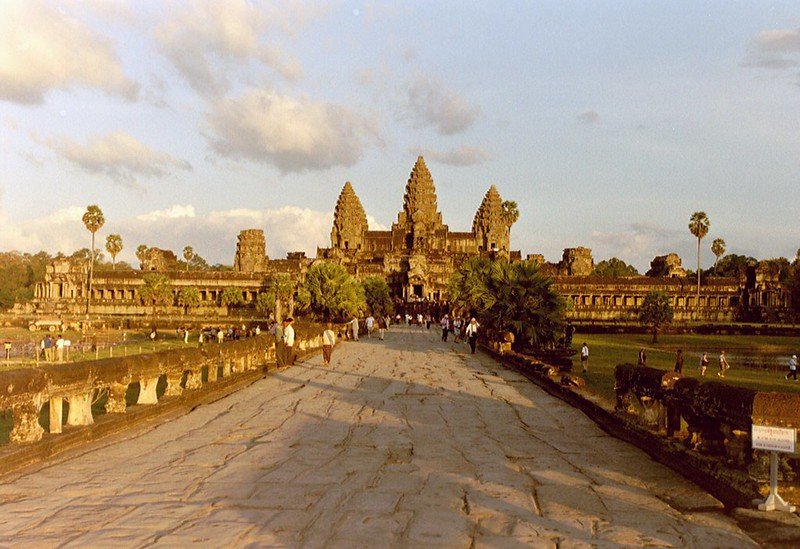 If you ever plan a trip to Angkor, there are few temple etiquettes that you must obey to respect their highly honored culture and tradition.

They will expect you to dress up modestly and cover your upper arms and legs. Touching, sitting, and climbing on the ancient structures are prohibited. And you should respect the monks residing in the Angkor Wat temple complex.

Unrivaled in scale and grandeur, Angkor Wat is the world’s largest religious building ever raised.

Today, the entire Angkor complex is a UNESCO World Heritage Site that scientists are struggling to preserve while protecting it from the environmental threats.

Read About: Jaisalmer Fort, a historic architecture reveals stories of pride and glory

Previous Post
Cherry Blossom Festival In Japan. A must see this Springtime!

Next Post
Shigmo Or Shigmotsav in Goa. A Must Watch Fusion of Color and Carnival