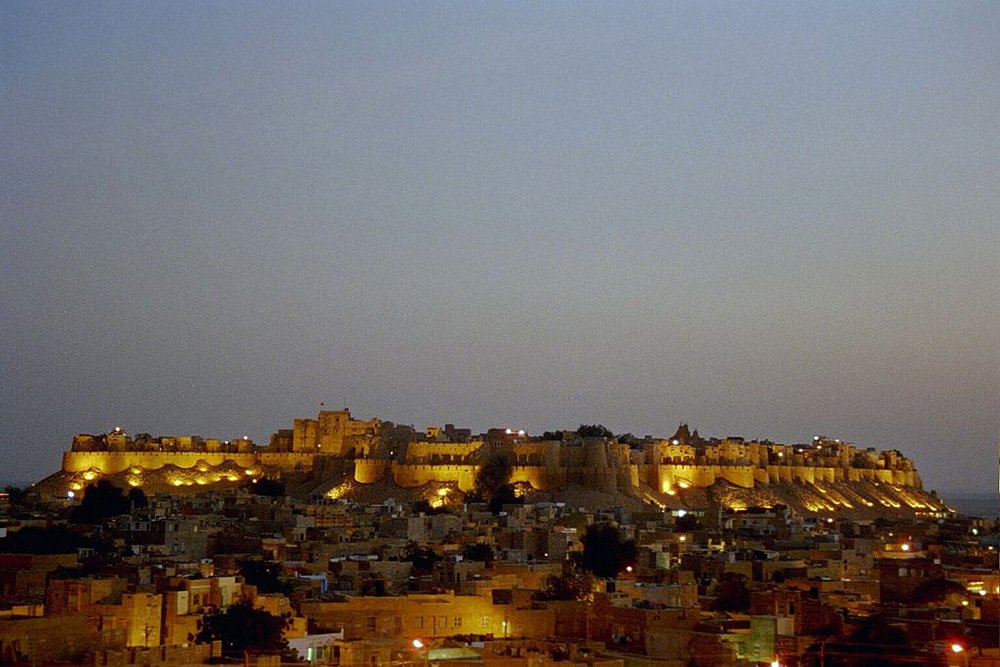 In the heart of the great Thar desert, the Golden city of India- Jaisalmer lies. Jaisalmer, once the classic land of Maharajas (the kings), is a multi-colored city in the Indian state of Rajasthan. As a crown atop the city, the epic Jaisalmer Fort (popular as the Golden Fort) stands dignified with countless valorous tales from the Rajputana empires.

The brave Rajputs once ruled the city, and their battle-scarred heritages, entrenched with pride and tradition, are still standing high in Jaisalmer with honor and esteem.

The Golden Fort of the Golden city: Are they really made of gold?

Jaisalmer stands on a ridge of yellow sandstone.

The architecture of the entire city, every big and small, along with the Jaisalmer fort, is also made of yellow sandstone.

At the time of sunrise and sunset, when sunrays reflect on this historic city and its unique architecture, and the surrounding largely expanded great Indian Thar desert and its bounteous sand dunes flowing in it,

This gives the city an exact golden look and perfectly frames Jaisalmer as the ‘Golden City’ of India and the fort made of yellow sandstone as the ‘Golden Fort’.

The Jaisalmer fort is among the very few ‘living forts’ in the world where people are still residing inside fort premises. It’s the second oldest fort in Rajasthan and was declared a UNESCO World Heritage Site in 2013, along with 5 other forts under the group of Hill Forts of Rajasthan. 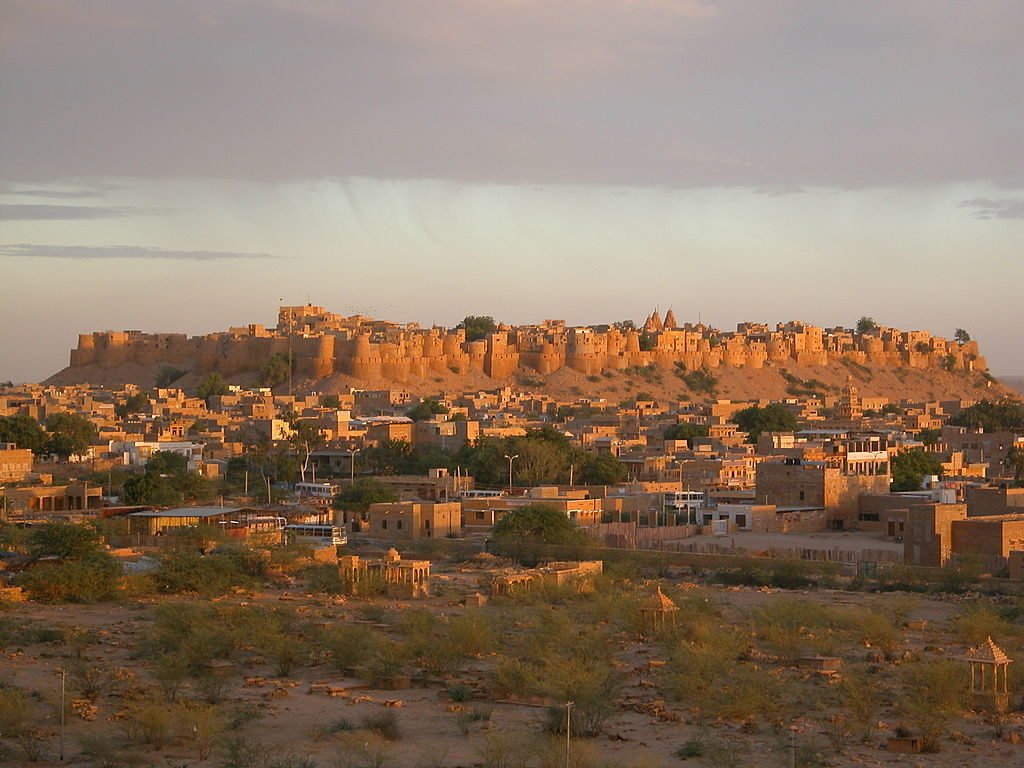 The Jaisalmer Fort at sunset

Jaisalmer fort is an architectural enigma in the pages of Indian history. This historic fort is colossal; 1500 ft long and 750 ft wide. It’s standing on a hill that’s rising above a height of 250 ft above the surrounding area. The base of the fort has a 15 ft tall wall forming the fort’s outermost ring within its triple ringed defense architecture.

The fort’s upper towers form a defensive inner-wall perimeter that is about 2.5 miles long. It has 99 bastions and 4 huge entrances. These entrances are popularly known as the Aksya Pole, Suraj Pole, Ganesh Pole, and Hawa Pole.

The entire architecture is made of yellow sandstone and displays typical Rajasthani designs and patterns. In some parts of the fortress you find a fusion of Rajasthani and Islamic architecture. It is  no wonder as many Muslim rulers invaded the fortress multiple times and took control over the fort.

Jaisalmer fort was founded by the Bhati Rajput ruler Rawal Jaisal in 1156CE, atop the Trikuta hill.

However, going back to 1156, Rawal Jaisal built the Jaisalmer fort as his new capital shifting from Lodhruva (the old capital of Bhati dynasty) and named it after his own name, Jaisal (Jaisal to Jaisalmer).

Since then, the Jaisalmer fort was attacked multiple times in different timeframes by many invaders. This is the only fort in Rajasthan that witnessed two and half Saka in its time.

In history, if the Rajput warriors would face defeats in war and lose possessions, the Rajput queens would perform Jauhar and Rajput men carried out Kesariya.

Jauhar was a ritual of self-immolation by Rajput women where they would jump into a pit of fire to protect their honor and not to be touched by the invaders, while men wearing saffron robes would march to the battle field to end their lives with respect. This was called Kesariya.

This tragic incident of dual sacrifices is called saka, a Rajputana tradition to embrace death in an honorary way.

(Rajputs always preferred to die instead of getting insulted by enemies and becoming their slaves). 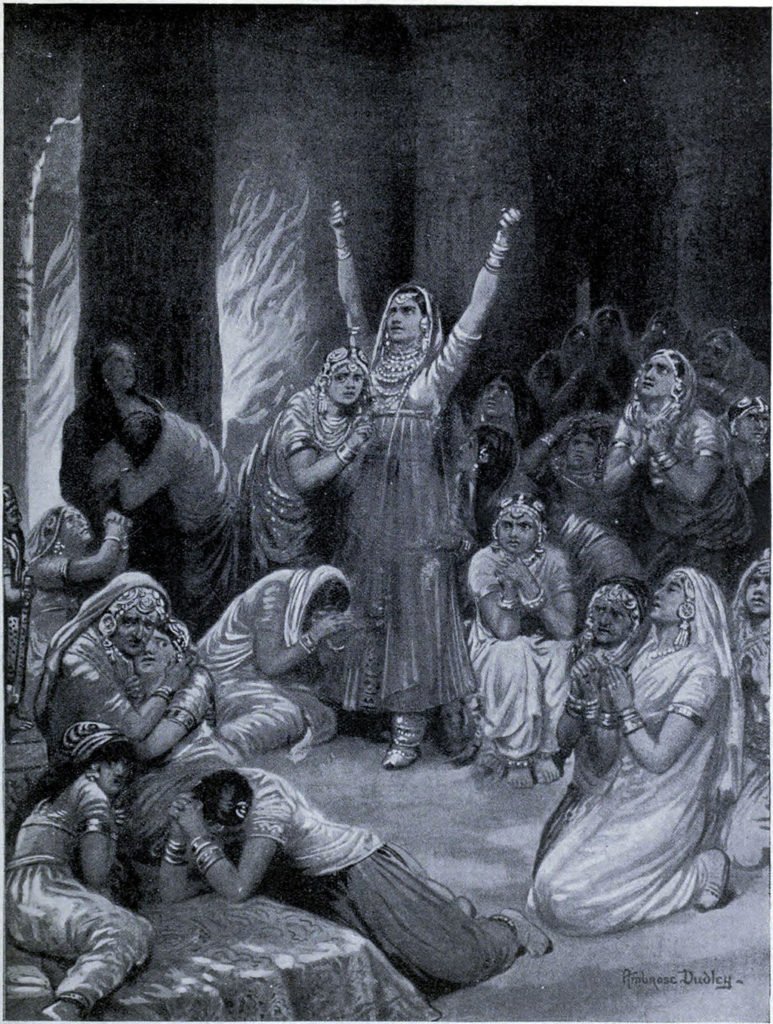 The Rajput Ceremony of Jauhar

During the reign of Rawal Jethsi (The exact time period is controversial. It is somewhere between 1200 to 1300), the golden fort was sieged for 8 years by then Delhi Sultan (the emperor) Alauddin Khilji.

The Bhatis fought bravely and defended the fort for 8 long years. But in the end, facing repeated defeats, Bhatis found no alternative other than performing the rite of Saka. About 24000 women did Jauhar by jumping into fire and Bhati men performed Kesariya.

This was the first Saka of the golden fort’s history.

Khilji’s army entered and occupied it. But later they abandoned the place and the Jaisalmer fort remained deserted for long till the rest of surviving Bhatis reoccupied it.

Tughlaq king attacked the fort and the second Saka was performed

In the late 14th century, Firuz Shah Tughluq was ruling in Delhi and attacked Jaisalmer fort. This attack led to the second Saka in the fort of Jaisalmer, in which 16000 women clasped death by jumping into fire and 1700 warriors performed Kesariya.

In the 16th century, during the reign of Rawal Lunakaran, the Jaisalmer fort was again attacked by an Afghan chief Amir Ali. He requested Rawal to allow the Jaisalmer queens to meet his wives (Amir Ali’s wives). But instead palanquins carrying women, Amir Ali betrayed by sending the palanquins loaded with armed forces.

The Rawals fought back strongly but sensing defeat in the battle, the Rawal king slaughtered his queens by his own sword as there wasn’t enough time to arrange Jauhar. It is known as the half Saka.

Rawal Lunakaran died in the battle, but the army of Rawals defeated Amir Ali. Amir Ali was blown up by a cannonball by the Rawals.

The Mughal king Humayun also attacked the Jaisalmer fort in 1541 and controlled the fort till 1762.

The Jaisalmer fort was invaded and influenced by many invaders again and again.

The journey of Jaisalmer fort since its inception to the time when Jaisalmer was added to the Indian Union after the Indian Independence in 1947 is full of attacks, assaults, defeats, victories, braveries, and unimaginable sacrifices.

Today, after 800 years, this historic fort is mainly a tourist destination. People from all over the world come to admire the beauty of the Jaisalmer fort and get lost in the pages of its history. In addition, almost one-fourth of the Jaisalmer’s population still resides in the fort.

Inside the Jaisalmer fort premises, there are many old palaces and temples, the symbols of wealthy Rajput territory. Many of the old palaces have been converted into luxury hotels and few into Museums that preserve Rajputana culture. The museums have the belongings of Rajputs such as the clothes worn by Rajputs, the weapons used in wars and so on.

Inside, there is the Raj Mahal Palace, the former residence of the Maharawal of Jaisalmer.

There’re seven Jain temples that exhibit the beauty of amazing ancient architecture built between the 12th and the 16th Century.

Also stands a religious construction of the Laxminath temple dedicated to Lord Vishnu and Goddess Laxmi.

Many merchant havelis (the mansion) carved from yellow sandstone with many floors and countless rooms having oriel windows, archways, doors, and balconies also line the fortress.

Inside and outside the Jaisalmer fort, there are street markets full of indigenous goods; traditional Rajasthani clothes and accessories, puppets, handcrafts, and beautiful Rajasthani paintings portraying Rajput lives.

Decades have passed, things have changed, but the strong aroma of Rajput culture still pervades the air of Jaisalmer fort, the Golden Fort of Rajasthan, India.

Next Post
Bali, a lush tropical paradise, in the heart of Indonesia