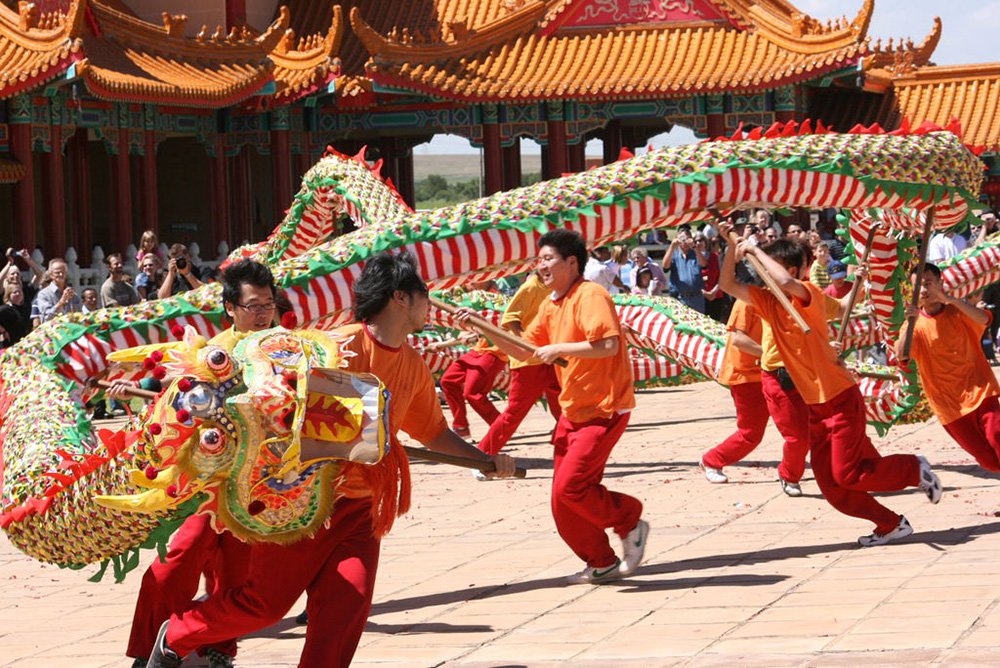 Chinese New Year 2020 is here! China welcomes the year of the RAT

Chinese New Year or Lunar New Year is a popular Chinese festival that celebrates the dawn of a New Year, following the traditional Chinese calendar.

While most of the world welcomes New Year by following the Gregorian calendar (which is a solar calendar), China gives a toast to New Year following the Chinese traditional Lunisolar Calendar (the calendar that indicates both the moon phase and the time of the Solar year).

Chinese New Year is also famous as the Spring Festival and China’s most awaited holidays are woven into it.

Traditionally, it was the time to pray for bountiful harvest.

Not only China, but many East Asian and Southeast Asian countries like Japan, Korea, Vietnam, Malaysia, Singapore, Indonesia, and the Philippines; the countries with Chinese cultural influence and a significant Chinese population also celebrate the Chinese Spring Festival (or Chinese New Year).

In the Chinatowns around the world like in New York, London, Paris, and Sydney, Chinese New Year celebration is seen with much impact and traditional fervor. 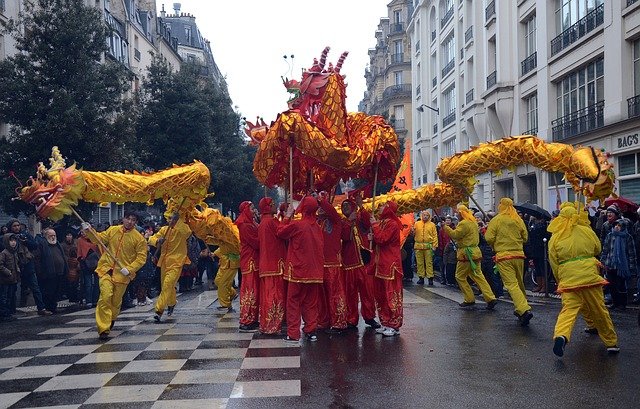 When is the Chinese New Year celebrated?

The Chinese New Year begins with the new moon that appears between 21 Jan to 20 Feb. It’s a 15-day-long celebration that ends with the grand finale of the Lantern Festival.

Do you know how is the Lantern Festival celebrated? READ here

Do you know that the Chinese follow 12 Zodiac signs, each for every year?

Each year stands for a zodiac sign and each sign shows an animal figure. Rat, ox, tiger, rabbit, dragon, snake, horse, sheep, monkey, rooster, dog, and pig are 12 signs of the zodiac that decide the coming year for the Chinese.

Your marriage, career, time to have babies, and many more important decisions you can take are based on if this year it’s your sign.

You must be thinking if it’s your zodiac year, it’s a lucky year for you.

Actually not! If it’s your zodiac year, you’ll have to be cautious and protect yourself from evil power (following the Chinese belief).

How is the Chinese New Year celebrated? 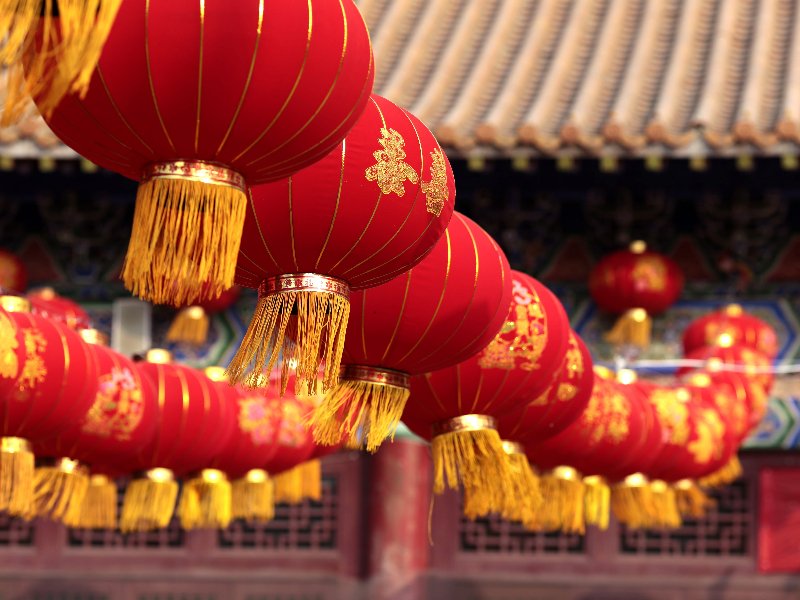 The Chinese at this time of the year throw the longest holiday; 10 to 15 days for office employees and 1-month winter vacation for school children. 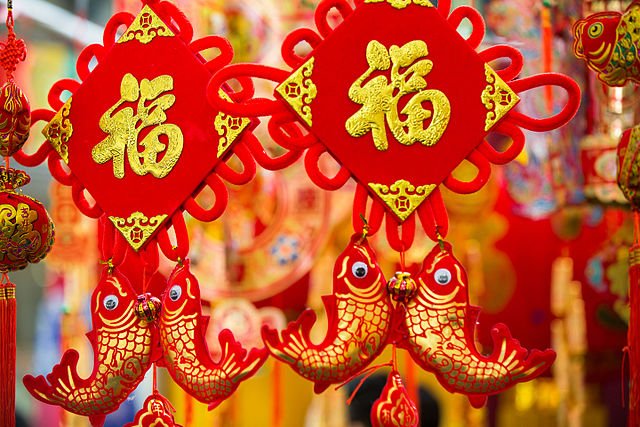 People clean their houses to wipe off bad-fortune and make houses neat and tidy to welcome good for the coming year.

Homes are decorated with fancy red decorations, paper cuttings, folk painting, and other eye-catching red decorating stuffs; and red lanterns are lit up.

They wear red during the festival and firecrackers rolled up in red paper are burnt.

Why do Chinese use so much red? It has an interesting story to tell. Coming to it soon!

Nevertheless, in China, the Chinese New Year celebration is the time when family, friends, and relatives reunite and cheer.

Families gather for an annual reunion dinner. The occasion has much importance and value in Chinese culture. Chinese living in different cities or overseas countries travel back home to be with family for this occasion and to have dinner together.

(However, considering environment and safety many large cities like Beijing and Shanghai ban personal fireworks. Public firecracker shows are in trend.)

It’s a must watch in Chinese New Year celebration. 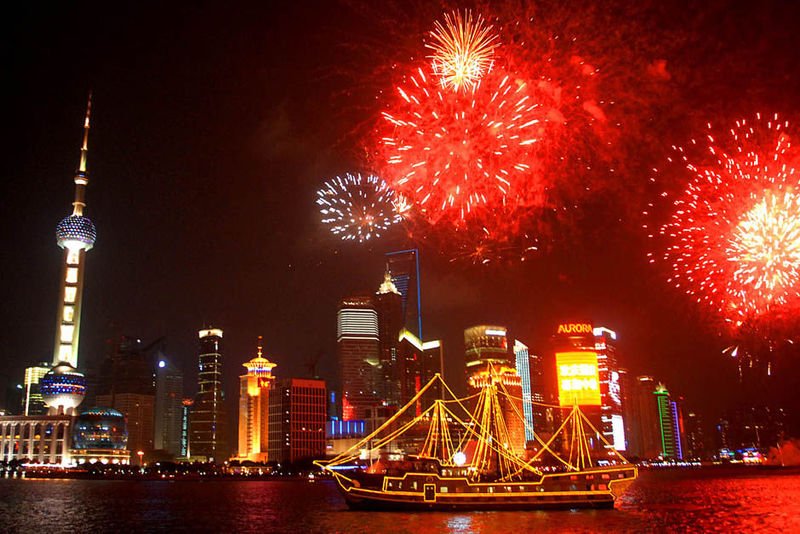 Elders give red envelopes (with money in it) to younger members of the family. It’s a Chinese way to convey blessings and good luck to the youngies.

The amount is always an even number, because an odd amount is given at the time of funeral in China.

And for the Chinese, things like a handkerchief, towel, white or black stuff, clock or watch, sharp objects like scissors and knives, and shoes are taboo. You shouldn’t pick those as New Year gifts. 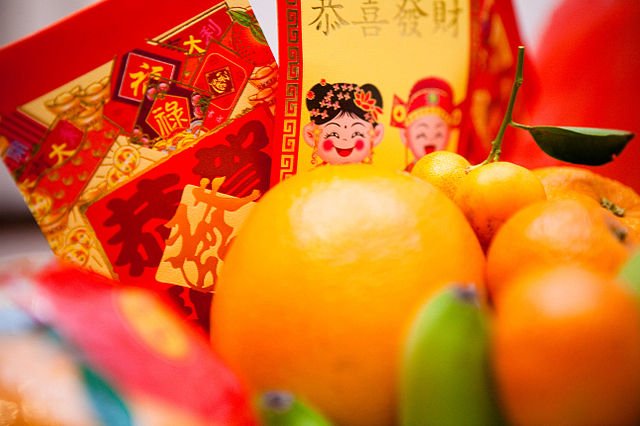 The prime attraction of this evening is the ‘Chinese New Year Gala’ broadcasted by China Central Television. It’s a 5 hour long much popular TV program featuring dance, drama, music, and comedy. The Chinese greatly enjoy watching this with family.

Chinese New Year celebration continues for the next 15 days and ends on the very first full moon night of the Chinese calendar with the grand finale festival of releasing Sky Lanterns in the night sky.

Let’s now know why Chinese use so much red throughout the celebration!

Why do Chinese hang red lanterns, paste red couplets, and burn loud firecrackers rolled up in red papers? It has interesting to tell.

According to Chinese mythology, in ancient China, Nian (a lion-like monster) would live deep inside the sea. He would come up every New Year’s Eve to eat animals and humans. Villagers would flee to a safer place to save their lives.

On one particular year, a man took shelter in the village and promised to chase away the monster forever. He decorated doors and windows with red and lit up red lanterns.

When it was midnight, Nian lumbered in and stopped outside the door seeing red colors. He roared in anger. He trembled in fear with the noise of loud firecrackers the man set off.

The next morning the villagers came back and found everything safe. Nothing was destroyed! They realized that the color red and loud noise can scare Nian.

Since then, on every new year, people burn firecrackers and decorate with red to scare away bad energies.

Another must watch during Chinese New Year! 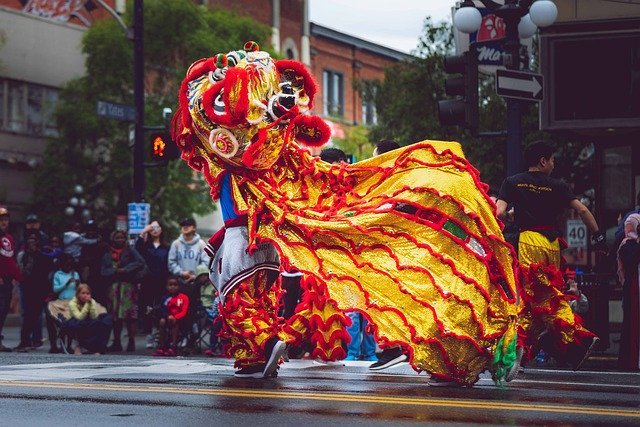 Colorful traditional dance dramas play out across the festivity.

Wearing colorful costumes of lion and dragon, Nian mythology is performed during the shows outdoors. Many temples put on festive dragon and lion dance in its courtyard.

It’s one of the most globally recognized arts.

Accompanied by drumbeats and cymbals, the performance is a major part of the Chinese New Year Parade.

You may find sometimes, a flying lion dance is taking place in the air!

Next Post
Cherry Blossom Festival In Japan. A must see this Springtime!