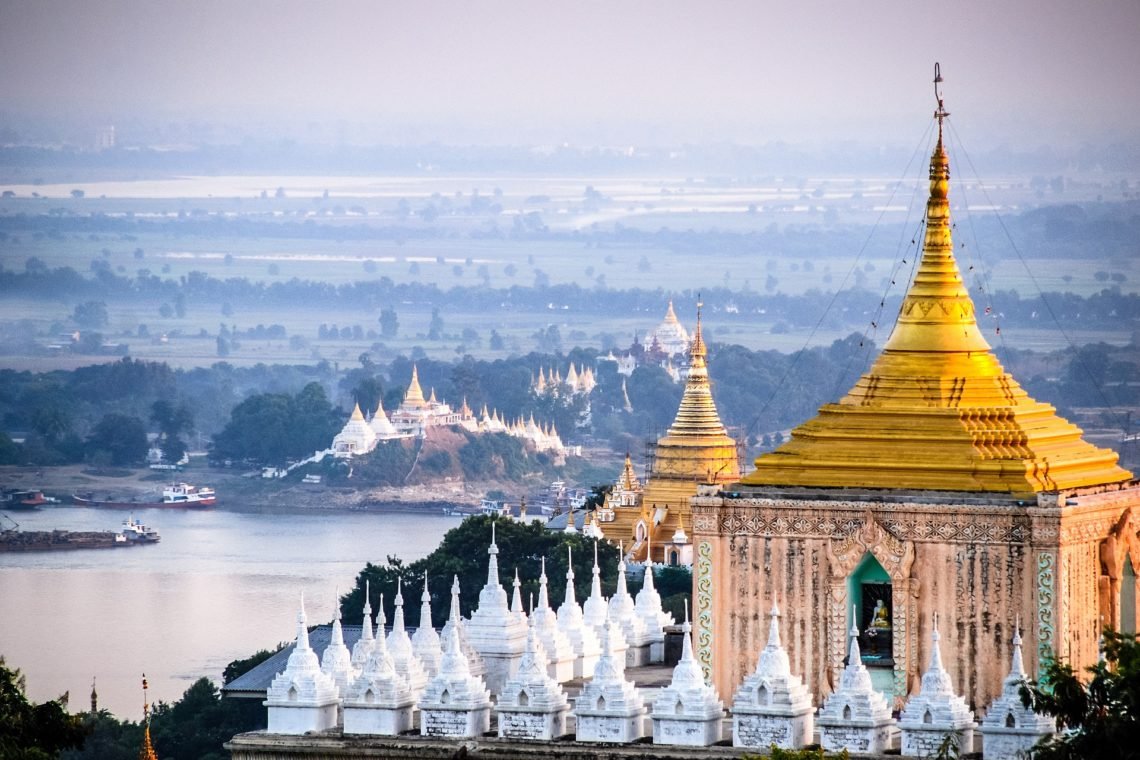 Mandalay is a beautiful town in Myanmar with royal possession and ethnicity. Nature has blessed this part of the earth with abundance of beauty and cultural prosperity.

Thousands of Pagodas, temples, breathtaking architectures, city’s admirable history, and the flourishing river Irrawaddy silently flowing at the edges of the city, make Mandalay a worth visiting place in Asia.

Mandalay is the second-largest city (after Yangon) and the cultural capital of Myanmar, a Southeast Asian country with more than a hundred ethnic groups and predominant religion, Buddhism.

The country is bordered by India and Bangladesh to its west, Thailand and Laos to its east, and China to its north and northeast.

Myanmar is the largest of the mainland Southeast Asian states. And Mandalay is its pride.

The admirable history of Mandalay

Mandalay was Myanmar’s (then Burma) final royal capital before the British invaded the kingdom in 1885.

Most of the city’s kingly properties were almost destroyed due to heavy bombing and fire of war.

Later in 1948 when the British left, Mandalay became a part of the newly independent Union of Burma (now Myanmar). And slowly the city has restored its grace and elegance.

Today, Mandalay is the economic center of Upper Myanmar and the center for Burmese culture. The city offers splendid things to do and see when you travel to Myanmar.

Mandalay is the home to many pagodas (tall buildings that are mainly used for worshipping God in Asian countries), several monasteries with impressive architecture, and a large number of monks residing in Mandalay which offer you a mystical spiritual journey.

Buddhism runs deep in Myanmar and more than 80 percent of the population practices Theravada Buddhism (one of the two major branches of Buddhism; the other being Mahayana).

Mandalay is not only a city of temples and monasteries but also a city of royalty. The royal palace and other architectural monuments built by the kings take you to the time of the Burmese Kingdom. 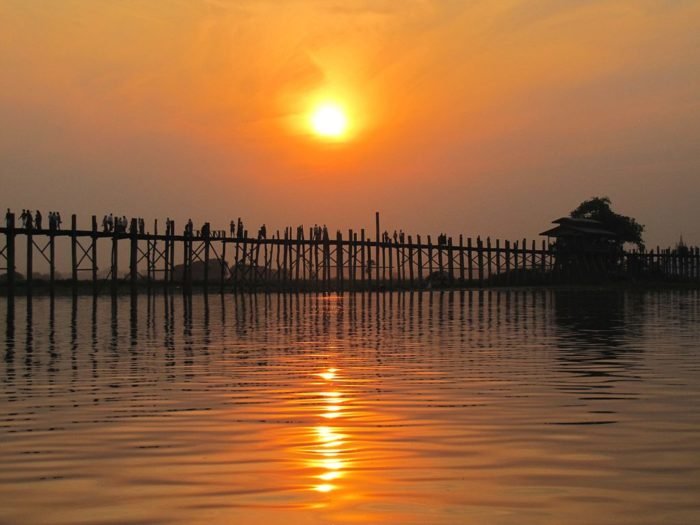 Near Amarapura (the former royal capital of Konbaung dynasty), U-Bein is the oldest and longest teakwood bridge in the world which was built between 1849 to 1851.

U-Bein is 1.2 kilometer long, usually used by the locals to cross the Taung-Tha-Man Lake, and also on every tourist’s list of things-to-do in Mandalay.

If you’re in Mandalay, it’s a small 20-min drive to reach U-Bein Teak-wood Bridge. The scenic views of this place, particularly at the sunrise and sunset, make U-Bein a must-visit destination for everyone traveling to Mandalay.

To capture the beauty of this place, try to reach early in the morning before sunrise. The stunning reflections in the lake, locals around you going to hunt their every-day livings, and fishermen casting their nets into the still water give you an enjoyable experience to see the primary living of people in Myanmar.

If you fail to reach at sunrise, visit during sunset. Rich hues of red blended with orange and crimson will transport you to a timeless existence. It is the most beautiful moment in U-Bein when the sun goes down and retires to the horizon. You feel happy seeing locals relaxing there after a whole-tiring day. Mya Nan San Kyaw, the Royal Palace in Mandalay was built at the time of King Mindon when he shifted his capital from Amarapura to Mandalay. (Between 1857 and 1859)

This is the last palace existing as the symbol of the last Burmese monarchy. It’s a huge fortress located near to the Mandalay hill.

There are multiple buildings including audience halls, throne halls, a monastery, a watchtower, a court building, a tooth relic building, and a library keeping Buddhist scriptures inside.

The palace was originally made of teak wood and placed in the center of the large fort. The square fort was surrounded by four walls each 2 kilometers long with a total of 48 turrets. In the walls, there were 12 gates each symbolizing a zodiac sign. Around the walls, there was a 60-meter wide moat, crossed by many bridges.

In 1885, the palace was captured by the British and converted into a fort for British Army.

During the Second World War, the palace saw massive destruction. Much of its parts were destroyed by bombing and fire.

A replica of the palace was rebuilt in the ’90s, however, using modern materials.

Today, the place is mainly a tourist destination; a must-visit place for you in Mandalay.

You’ll be amazed to see the elegance of Mandalay Palace, baring all good and bad the royal palace is still standing with the pages open to its history.

Mandalay Hill, the most attractive place in Mandalay 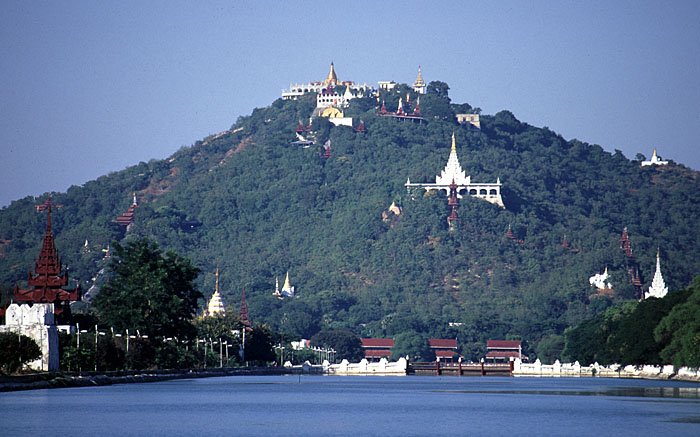 790 ft high, the Mandalay hill is located to the northeast of the central Mandalay. The city was named after the name of this beautiful hill Mandalay.

Legend says, once the lord Buddha visited the hill and said that a great city would grow up at its foot.

Almost everyone who travels to Mandalay visits Mandalay hill. The place is famous for its abundance of pagodas and monasteries. This place is an important pilgrimage for Burmese Buddhists.

While most of the Mandalay is flat, this hill offers you a stunning elevated view of surrounding moats, many temples and pagodas, and the river Irrawaddy gleaming from far.

Four covered stairways leading up the hill from the south, southeast, west, and north take you to the top. People climb up these staircases barefooted.

If walking up the long staircases is not your choice, not to worry! You can easily get a taxi or take an elevator to make your journey easier, available right at the foot of the hills.

Although climbing the staircases while admiring the serene beauty of Mandalay will always give you a more joyful experience than sitting inside a taxi. And once you reach, a great panoramic view of Mandalay from the top of the hill will make all your effort worthy.

People prefer to stay there during sunrise or sunset to relish the great beauty of Mandalay.

At the top of the hill, there’s Su Taung Pyae Pagoda, a ‘wish-granting’ pagoda that was built by King Anawrahta, the founder of the Pagan Empire, in 1052. People coming to Mandalay hill don’t forget to bow-down here. 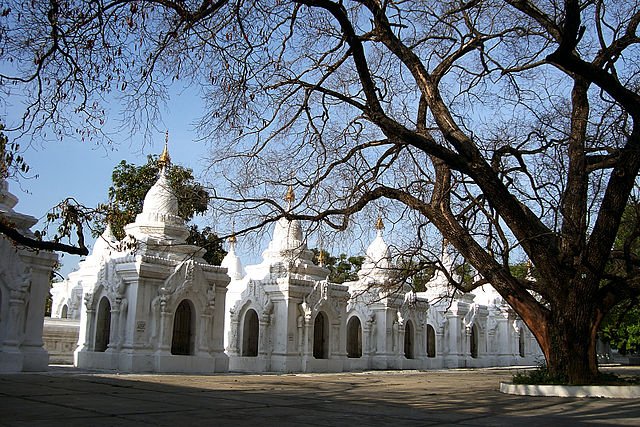 Nestled at the foot of the Mandalay Hill, there is Kuthodaw Pagoda. It is an incredibly large Buddhist stupa which was built during the reign of King Mindon Min after the foundation of Mandalay in 1857.

The huge size of this area is impressive and it is surrounded by countless white pagodas.

King Mindon wanted to imprint Buddha’s teachings at one place, and therefore, the entire text of the Tipitaka Pali Canon of Theravada Buddhism was inscribed in huge stone slabs inside the Kuthodaw Pagoda.

There are 729 slabs in total. Each slab is a meter wide, two meters tall and 13 centimeters thick.

These slabs are filled with the sacred teachings of Buddha, representing 15 books comprised of Buddha’s teachings.

This has made Kuthodaw Pagoda the home to the ‘World’s Largest Book’.

It is said to take more than a year if you want to read them all and spend 8 hours a day in reading.

Originally the texts of this book were filled in with gold.

But when the British invaded, they stripped away every piece of gold from the texts. Today the writing is marked in black ink made from shellac, soot from paraffin lamps and straw ash.

Kuthodaw Pagoda invokes deep respect for Burmese culture and civilization when you spend time amongst these countless stupas that are still living bodies of Buddha’s amazing teachings.

Also Read: Bali a lush tropical paradise in the heart of Indonesia

You may also like: Floating Markets in Thailand, Bangkok